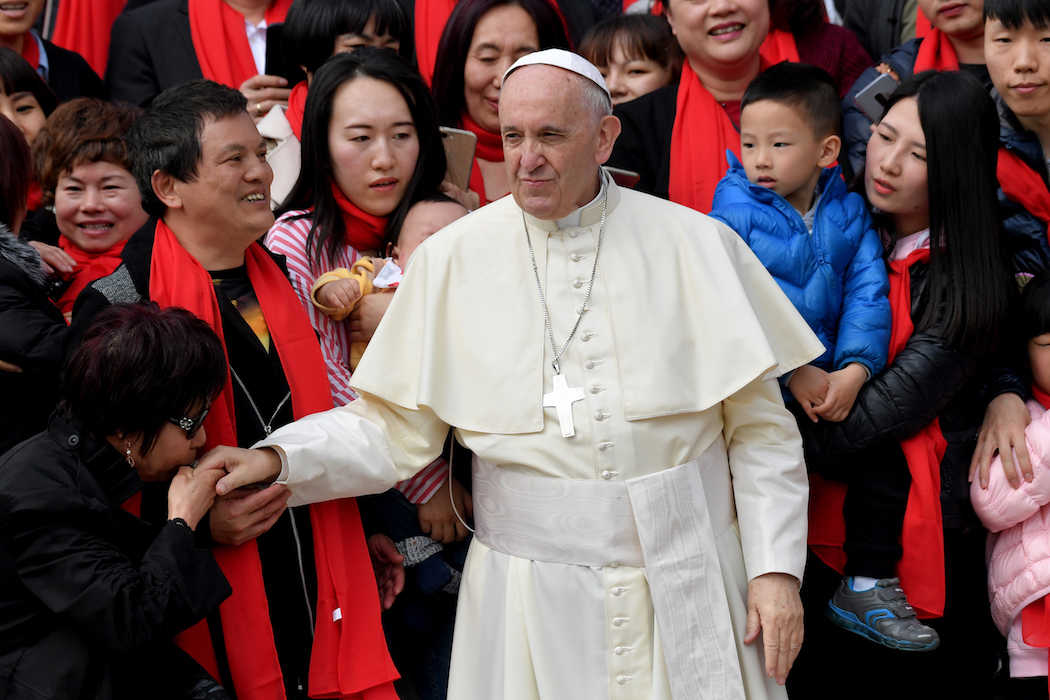 Pope Francis greets faithful from China as he arrives for his weekly general audience on April 18 at St. Peter's Square in the Vatican. (Photo by Tiziana Fabi/AFP)

After a long break, talks have resumed in recent weeks between China and the Vatican over a deal to normalize the appointment of bishops, according to reports coming out of Rome, with Pope Francis saying he remains committed to dialogue with the ruling Communist Party.

The first round of talks since last December was held in Rome in the second week of June, according to wire service Reuters, citing unnamed Vatican sources.

Neither side has ever confirmed the timing of talks and Rome has previously also indicated that any final agreement may not be released publicly. There have been unconfirmed reports that the target date for an initial deal was this month.

But talks might have been complicated by the case of Bishop Cui Tai, who has not been seen for two months since his abduction, and serial attacks on the church in the major Christian provinces of Henan and Hebei on the back of tough new religious regulations issued by Beijing on Feb. 1. Henan, home to more Catholics than any other Chinese province, has seen rules forbidding minors to worship in official churches, crosses removed and some places of worships shuttered.

Pope Francis spoke positively about a deal in an interview with Reuters at his residence.

"We are at a good point," the pope told reporter Phillip Pullela, adding that "dialogue is a risk, but I prefer risk rather than the certain defeat that comes with not holding dialogue."

He added: "As for the timing, some people say it's Chinese time. I say it's God's time. Let's move forward serenely."

The pope described the talks as being in three parts: official dialogue, unofficial contacts between ordinary citizens "which we do not want to burn," and cultural dialogue.

Estimates of the number of Catholics in China range from 9-12 million, with the percentage in the "official "church between 50-70 percent.

Opposition to the deal remains strong in the so-called underground church, where Catholics opposed to Beijing's control worship in venues from their own churches to halls and private homes, often called house churches.

The main public cheerleader for the underground church is Hong Kong's Emeritus Cardinal Joseph Zen Ze-kiun, who repeated his opposition to the deal in an interview in online publication Hong Kong Free Press in May.

"Some are saying maybe now there are difficulties on the Chinese side, because there are people who think that they don't need the agreement, they can control everything. Maybe there are voices in China against the eventual agreement," Cardinal Zen said.

"You see that there are many actions on the side of the government which show that they are tightening control on religion. And so it's more difficult to understand how the Vatican can come to a deal at this moment, because obviously they are seen as collaborating with the government."

Pope Francis appeared to allude to underground Catholics when he said he did not want "to burn" contact with Chinese citizens, observers said.

"We are willing to meet the Vatican side halfway and make new progress in the process of improving relations and advancing constructive bilateral dialogue," he said.

One of the key sticking points to the deal remains how the Vatican will deal with seven so-called illicit bishops, several of whom are known to have long-term relationships with women as well as children. Some reports have indicated that these bishops have been submitting their apologies to the pope in an effort to resolve the issue.