Chinese faithful attend Mass on Christmas Eve at a Catholic church in Beijing on Dec. 24, 2018. (Photo by Wang Zhao/AFP)

The recent ordination of two Chinese bishops has been hailed as evidence that the Vatican-China deal on bishops’ appointments is having an impact.

Coadjutor Bishop Stephen Xu Hongwei of Hanzhong in the northern state of Shaanxi was ordained on Aug. 28, just two days after the ordination of Bishop Anthony Yao Shun of Jining in Inner Mongolia, the first since the provisional agreement was signed last September.

The Vatican emphasized that the new bishops had been appointed by the pope and their ordinations were under the framework of the agreement.

Matteo Bruni, director of the Vatican press office, confirmed to the media that Bishop Yao had received a papal mandate and his ordination “is the first to take place in the framework of the provisional agreement between the Holy See and the People's Republic of China signed in Beijing on Sept. 22, 2018,” Vatican News reported on Aug. 27.

In addition, Vatican News reported on Aug. 28 that “nearly a year on, the deal is bearing fruit.”

Bishop Joseph Shen Bing of Haimen, deputy chairman of the Chinese Catholic Patriotic Association, said the ordinations are “a good start for China to elect and ordain more bishops as they are a successful example of relevant formalities and procedures.”

He also said the ordinations are “the best proof that the Catholic Church is developing well in China with the support of the Chinese government.”

He revealed that dioceses in Hubei, Shandong and Zhejiang provinces are also promoting elections of bishops.

“It's a result of the negotiations between the Chinese government, the Catholic community and the Holy See,” Wang Meixiu, a senior researcher at the Chinese Academy of Social Sciences, told the Chinese Communist Party-controlled Global Times newspaper.

Father Antonio Spadaro, chief editor of La Civiltà Cattolica, told Global Times that "it is a good starting point and can also be a positive model for others who should follow in the medium term." 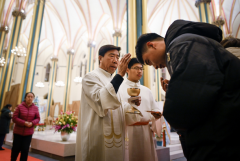 He said the ceremony to ordain Bishop Xu took place in a solemn and participatory atmosphere in the presence of all the bishops of Shaanxi.

However, a source told ucanews.com that Bishop Li Huiyuan of Fengxiang in Shannxi did not attended the ordination because he has not himself had a public inauguration and he is not recognized by the government.

Although media outlets have reported the ordinations positively, some China Church observers noted there is still not enough information to fully understand the bishop appointment procedure under the secret deal.

Both men were elected as bishops in April but sources pointed out that they were appointed by the pope before elections and the Vatican-China deal.

One observer said the ordinations revealed that the procedure for appointing bishops will continue in the same way as before the deal, with bishops first appointed by the pope before being elected by the Chinese diocese.

“Everyone knows that the old mechanism continues. The Vatican may fine-tune the method of appointments but more than half the voters will already know who is the candidate chosen by Rome already,” the source added.

Other China Church watchers pointed out that the wording in the Chinese language version of the Vatican News report stated that Bishop Yao’s ordination was the first “after” the deal instead of “in the framework”.

In the approval letter issued by the Bishop’s Conference of the Catholic Church in China (BCCCC), which the Vatican does not recognize, it only mentions “the pope agreed” to the ordination but there is no wording related to “mandate.”

Global Times reported in English on Aug. 27 that the BCCCC Vice Chairman Bishop Paul Meng Qinglu of Hohhot said “during the ceremony, the mandate of Pope Francis was mentioned,” but not read out.

The Global Times also noted that China faces a shortage of bishops, with about a third of its 98 dioceses having no bishops and many of the older bishops about to retire.

This article was updated after initial publication.