Dicastery for the Service of Charity spent $2.2 million alone for humanitarian aid in Ukraine 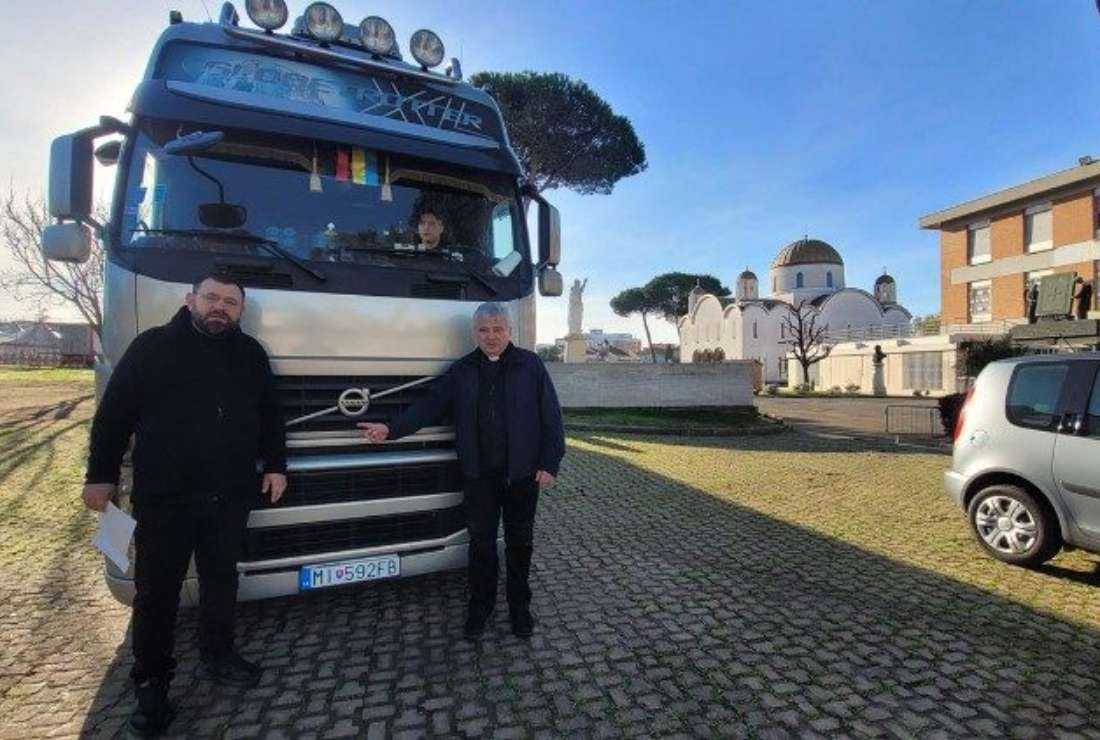 Cardinal Konrad Krajewski with the aid vehicle leaving for Ukraine with Rome's Church of Santa Sofia in the background. (Photo: Vatican News)

It was a sunny day in Rome Jan. 13 when a truck was fully loaded with supplies. Thermal clothing, power generators and food were put inside with the help of a papal official: Cardinal Konrad Krajewski, Pope Francis’ almoner.

On Jan. 18, the truck arrived in Zaporizhzhia in eastern Ukraine.

Auxiliary Bishop Jan Sobilo of Kharkiv-Zaporizhzhia told OSV News that the driver of the truck expressed his surprise upon arriving in Ukraine that a cardinal from the Vatican loaded the truck with the help of volunteers in Rome, which is only one example of charity efforts of the Vatican to help Ukraine suffering from the full-scale Russian invasion since Feb. 24, 2022.

The Dicastery for the Service of Charity, led by Polish Cardinal Krajewski, spent $2.2 million (2 million euros) in 2022 for humanitarian help in Ukraine, the papal almoner told OSV News. "Another 2 million (euros) is waiting in reserves for that purpose, since the war is still going on and people are a bit more tired of providing help in any long-term conflict."

The Vatican funds are concrete help throughout Ukraine, and Bishop Sobilo is one of the recipients. "I distribute them according to the needs in the region," he told OSV News.

One beneficiary is Orionine Sister Renata Jurczak, who runs a home for single mothers in Kharkiv in eastern Ukraine.

"When I receive a phone call that someone is willing to give me money or supplies, I start screaming with joy, even if it sounds a bit crazy," she told OSV News.

At the end of 2022, the situation of the home was dire: She drove back and forth to neighboring Poland to get food, medicine and chemical supplies for mothers and refugees who take shelter in a house the sisters called "Hope."

Sister Jurczak and three other Orionine sisters in Kharkiv host 25 people in their house -- mostly single mothers but also refugees, families who lost everything in eastern Ukraine due to Russian invasion. "We are so grateful to the Holy Father, it will really make a difference," she said.

Sister Jurczak said she will use the papal money mostly for diesel supplies.

The Vatican money also will help provide sports and arts classes for the children.

"It's a win-win. We provide bits of a normal life for the kids from the neighborhood but also the teachers that stay in our house unable to work their normal jobs. They teach the kids karate, music and English, and now we'll be able to pay them for their work," Sister Jurczak said.

"It shifts their thinking from war reality to a more normal life," she added.

Orionine sisters also prepare food packages for people from villages near Kharkiv. "They were poor even before the war, and you can't even imagine what their status is now with constant fighting around," she said.

Every day Bishop Jan Sobilo sends short videos to Cardinal Krajewski -- each with a note of thanks from whoever just received the papal money.

"We have Albertine Brothers here in Zaporizhzhia. They bake bread three times a week and distribute it to the people. More and more people come, unable to get bread anywhere else, so the brothers need money to keep baking it," Bishop Sobilo told OSV News.

He also supplied a local medic with papal money. "She goes to the trenches, saving lives. She knows best what kind of bandages are needed," Bishop Sobilo said.

Besides supplies, he said, the truck from Rome brought something else: a little extra joy.

"Soldiers eat mostly canned food for months, the fact that there was a load of panettone (Italian Christmas sweet bread) coming from the pope brought them a true sense of feast," Bishop Sobilo said.

Besides helping Ukraine with $2.2 million, another $8.5 million of papal charitable funds were distributed to people in need around the globe in 2022 by providing medical supplies, food, sanitation and lodging.

"The money is distributed according to the needs through pastors here in Rome, as the Holy Father is bishop of Rome, throughout Italy by parish priests and through papal ambassadors (papal nuncios) around the world," Cardinal Krajewski told OSV News.

"We help hospitals, monasteries, foundations that care for the needy and poor," Cardinal Krajewski told OSV News. Anyone who needs supplies or money asks the pope and nuncios around the globe, and parish priests throughout Italy check out the cause, and "when the cause is accepted, we help," the cardinal said.

Pope Francis appointed Cardinal Krajewski papal almoner in 2013. The Office of Papal Charities (Elemosineria Apostolica) was renamed the Dicastery for the Service of Charity in June 2022, and since then the cardinal has been its prefect.

Cardinal Krajewski traveled five times to war-torn Ukraine in 2022. During the first trip in March 2022, he attended an interreligious prayer service for peace in Lviv, and on the second trip he delivered an ambulance donated and blessed by Pope Francis to a Lviv hospital. During the third trip over Easter another papal ambulance was donated to a Kyiv hospital. However, what made headlines across the globe was the picture of the papal almoner praying over the freshly discovered mass graves in Bucha.

During the fourth trip in mid-September, the cardinal visited eastern Ukraine and escaped gunfire while distributing supplies with Bishop Sobilo in Zaporizhzhia. The following day, he visited mass graves in the eastern city of Izyum.

The last trip Cardinal Krajewski made in 2022 to Ukraine was for Christmas, when he secured delivery of thermal clothes to Ukraine.

"The trucks full of thermal clothes would have been stopped at the border because of power generators that it was carrying as well, therefore we unloaded the truck and I drove my minivan from the Polish city of Lezajsk to Lviv in western Ukraine three times a day for three days in a row, 600 miles daily," Cardinal Krajewski told OSV News.

He said the pope’s words resonated in his head while he was driving back and forth: "'You wear your red hat for the poor.' That's what he told me (in) creating me cardinal," Cardinal Krajewski said.

"It is only possible to drive quickly through the border without waiting in a 12 to 17-hour line at the Polish-Ukrainian border on diplomatic (license) plates," the cardinal said, "so the fact I was there for those affected by war, helped me get through that border."

Cardinal Krajewski said more than 10 million dollars distributed by his Dicastery in charity works in 2022 was only possible because of people of goodwill.

Associates of his dicastery set up a crowdfunding campaign in December to help finance thermal clothing for Ukraine.

He said two Italian sports clothing companies had helped tremendously: Campagnolo provided 20,000 thermal T-shirts for five euros each. "They are worth 40 euros each, so it was really giving them away almost for free," the cardinal said. Another company called Macron, provided eight pallets of thermal clothing that were already sent to Ukraine.

Sister Jurczak said she's happy the world is willing to assist those that have nothing left. She said to feel the closeness of the pope himself is comforting.

"I try to keep strong," she told OSV News. "What makes me depressed is when I go somewhere where a year ago I saw houses full of love and now I see ruins. I sometimes ask God, 'Please stop this madness,' and the only thing that keeps me going is that there is nothing impossible for my Lord."