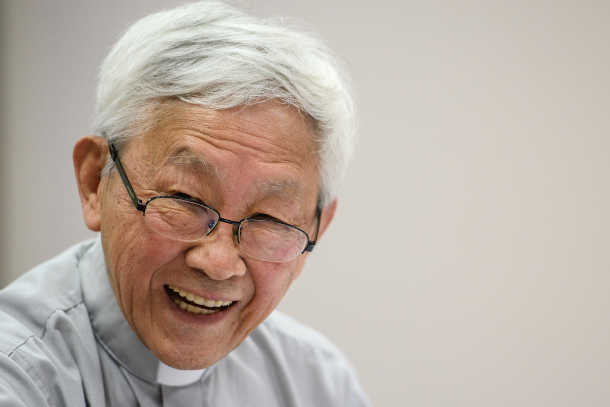 Cardinal Joseph Zen, the former bishop of Hong Kong, speaks during a press conference at the Salesian House of Studies in Hong Kong on Sept. 26, 2018, following the Vatican announcement on Sept. 22 of a historic deal with China on the appointment of bishops in the communist country. (Photo: Anthony Wallace/AFP)

Outspoken Cardinal Joseph Zen Ze-kiun, the retired bishop of Hong Kong, has toughened his stand against a Vatican-China pact in an open letter accusing a Vatican senior cardinal of manipulating Pope Francis.

He accused Vatican Secretary of State Cardinal Pietro Parolin of passing incorrect translations of Chinese terms to the Vatican in his effort to push through the deal and neglect criticisms.

"I have evidence that Parolin manipulates the Holy Father, who always shows me so much affection but does not answer my questions," Cardinal Zen said in a March 1 letter.

Vatican bureaucrats have been pushing the 2018 Vatican-China deal on bishop appointments in the communist country, he claimed in his open letter.

Cardinal Zen's letter came in response to another letter that Cardinal Giovanni Battista Re, the newly appointed dean of the College of Cardinals, reportedly sent to all cardinals on Feb. 26 in the wake of Cardinal Zen's continued public opposition to the pact.

Cardinal Re's letter reportedly said the Cardinal Zen's opposition to the deal came from misunderstandings. It said the pact was in agreement with the thinking of two former popes, St. John Paul II and Benedict XVI.

"I admire your courage in venturing into matters which you also recognize as complex, jeopardizing the prestige of your newly inaugurated honorable office," Cardinal Zen said in his letter, published in his blog on March. 1.

Cardinal Re, 85, took office as dean of the College of Cardinals on Jan. 18, making him the virtual leader or "first among" the 203 cardinals of equal rights in the Catholic Church.

Cardinal Re's letter, quoted in the media, said Cardinal Zen has "affirmed several times that it would be better to have no accord than a bad accord. The three last popes did not share this position and supported and accompanied the drafting of the accord that, at the present moment, seemed to be the only one possible,"Cardinal Re said.

Cardinal Re also expressed surprise about Cardinal Zen maintaining that “the accord signed is the same one which Pope Benedict had, at the time, refused to sign”.

“That assertion does not correspond to truth,” Cardinal Re said.

Cardinal Zen contested this view and said if the signed agreement had already been approved by Pope Benedict XVI, "just show me the signed text, which I have not been allowed to see to date."

If it was approved at the time, "why was it was not signed then?" Cardinal Zen asked.

Cardinal Zen has been a determined opponent of the Vatican's September 2018 deal with Beijing on the appointment of bishops, whose text has not been published yet.

Since 1950, when China-Vatican diplomatic ties ended, the Chinese Communist Party (CCP) has rejected bishops appointed by the Vatican and appointed its own bishops. It divided the Church in China into the state-controlled open church and the underground church loyal to the pope.

The still-secret pact is said to have agreed that the Vatican selects the bishops but they are appointed with the approval of the CCP.

But critics like Cardinal Zen maintain that the pact surrendered the Vatican to the CPP and betrayed the underground church. The Vatican gave away too much for nothing, they say.

For example, they point to the fact that since the agreement only three of some two dozen underground bishops have been accepted by the Chinese Catholic Patriotic Association, the official body that runs the state-controlled church.

However, Pope Francis lifted the excommunication of eight bishops who had been ordained without the Vatican's approval.

Critics also say the pact would mean there will be no new bishops and priests appointed for the underground church, pushing the church to be under the total control of the CCP.

Cardinal Zen said it could not be hoped that communist rule "would collapse soon, but it was evident that instead of being conciliatory and accepting compromises, it was necessary to oppose strongly. This was the basic vision of John Paul II, which I also shared."

Cardinal Zen doubted if his communications had reached Pope Francis. "The Holy Father shows me so much affection but does not answer my questions," he said.

Confusion over the pact might have resulted from incorrect translations from Chinese made by junior officials in the Congregation for the Evangelization of Peoples.

They were also responsible for at least 10 errors in the translation of Pope Benedict's 2007 letter, Cardinal Zen said, quoting in Latin that "one with one eye will be king among the blind."

Cardinal Zen said he could not understand the Vatican position but would advise Catholics who seek his clarification on the Vatican's stand "not to criticize those who follow those provisions" of the pact.

"I encourage them to go back to the state of the catacombs without opposing any injustice. Otherwise, they would end up losing more," the letter said.