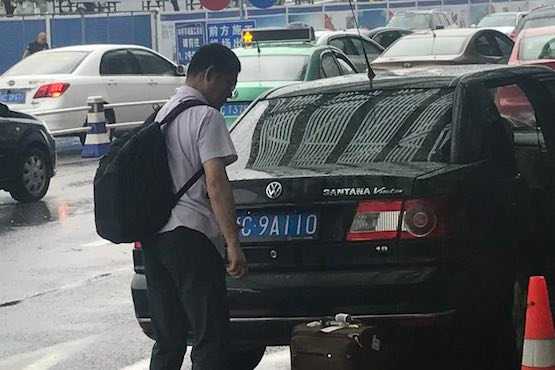 Bishop Peter Shao Zhumin of Wenzhou was spotted by local Catholics at Wenzhou airport on June 14. He was being escorted by government officials, said a church source. (Photo supplied)

The Vatican has broken its silence over the forced disappearance of an underground bishop being held secretly somewhere in China by the communist government.

In response to questions from journalists, Greg Burke, the Vatican's spokesman, released a statement June 26 about Bishop Peter Shao Zhumin of Wenzhou who was taken by Chinese government officials from his diocese in eastern Zhejiang province on May 18.

"The Holy See is observing with grave concern the personal situation of Bishop Peter Shao Zhumin of Wenzhou, forcibly removed from his episcopal see some time ago," said the statement.

The statement went on to say that the government has given no reason for the bishop's disappearance and that the Holy See is "profoundly saddened" by what has occurred and for "other similar episodes that unfortunately do not facilitate ways of understanding."

The Holy See expressed the hope that the bishop would return to his diocese as soon as possible.

The statement comes as a new round of China-Vatican negotiations on bishop appointments are expected to be held in Rome this week.

A week before the Vatican statement, Michael Clauss, German ambassador to China, appealed on June 20 to the Chinese government to free Bishop Shao.

The Catholic Justice and Peace Commission in Hong Kong has also demanded the immediate release of Bishop Shao as well as other Chinese bishops and priests. The commission held a protest in front of the central government's Liaison Office on the International Day in Support of Victims of Torture on June 26.

It is the fourth time that Bishop Shao has been detained since the Vatican confirmed him as Bishop of Wenzhou last September, following the death of his predecessor Bishop Vincent Zhu Weifang.

A church source from Wenzhou told ucanews.com that he had information that in the past month Bishop Shao was taken to Lanzhou in northwestern Gansu province and then to Chengdu in the southwestern province of Sichuan. The bishop was also spotted by local Catholics at Wenzhou airport where he was seen with government officials as he got into a car heading back to Wenzhou city on June 14.

The government has urged Bishop Shao to join the Chinese Catholic Patriotic Association (CPA) — which would then lead to his being recognized by the authorities. The CPA advocates an independent church principle, which is incompatible to Catholic doctrine.

Church media outside China reported that the authorities are demanding Bishop Shao persuade the Vatican to appoint a priest in the open church community as his coadjutor bishop.

"There are two possible candidates in the open community. One is wanted by the government and the other one is favored by the Vatican," the source in Wenzhou told ucanews.com.

The government's plans are for the new coadjutor bishop to replace Bishop Shao, said the source.

"No matter who, if the Vatican appointed an open church clergyman as coadjutor bishop, the government will sideline or continue to lock up Bishop Shao, as in the case of Baoding Diocese in northern Hebei province where Coadjutor Bishop Francis An Shuxin was installed to replace underground Bishop James Su Zhimin," the source said.

The source was worried that Bishop Shao would face the same fate of the long-imprisoned Bishop Su of Baoding, who is now 84 years of age.

Deemed a "counterrevolutionary" by the communist government because he refused to join the CPA, Bishop Su was arrested in 1996.

The bishop escaped detention in 1997 before being re-arrested. His family discovered him by chance at a Baoding hospital in 2003. He has not been seen in public since.

In an article on China-Vatican relations published in February, Cardinal John Tong of Hong Kong spoke of there being "more than 30" underground bishops on the mainland.