Appointment seen as a test to China-Holy See relations 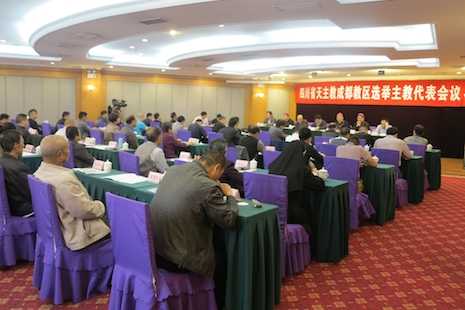 Chinese Father Tang Yuange was voted bishop-designate of Chengdu in a government-sponsored election in May 2014. (Photo supplied)

Sources in southwestern Sichuan province said the Holy See approved the appointment of Bishop-designate Tang Yuange of Chengdu in October, shortly after a six-member Vatican delegation visited Beijing to meet with Chinese officials.

"The news is now known by all priests and many Catholics," a local source, who asked not to be named, told ucanews.com, adding that the ordination will take place in 2016.

The election and Vatican approval is seen a test case for Vatican-China relations regarding Beijing's "democratic principle" for the church in China, which calls for bishops to be elected by government-selected voters comprised of clergy and nonclergy.

Father Tang's election in May 2014 came suddenly and surprised many church observers. It was the first election since Pope Francis assumed the papacy in 2013 and just a month before China resumed talks with the Vatican. Observers then regarded it a test for the Vatican.

China Church commentator Father Bernando Cervellera said Beijing's proposal to the Vatican calls for the Holy See to recognize all open bishops, including those who are excommunicated.

The suggested process is for bishop candidates to be democratically elected. The Vatican is then asked to approve appointments of the government-sanctioned bishops' conferences, or offer a veto. If Beijing finds the Vatican's justifications for a veto to be insufficient, the appointment will proceed anyway, Father Cervellera said.

"What Cervellera said is very true," a Chinese researcher, who declined to be named, told ucanews.com. "This is always what Beijing demands and the Vatican has to show its sincerity to resolve problems to have talks continue."