20-member panel to provide ideas to improve youth ministry of Dicastery for Laity, Family and Life 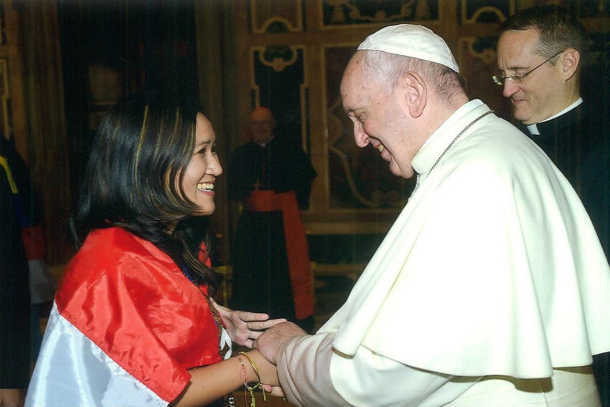 An Indonesian woman has been appointed a member of a new Vatican advisory body set up to help improve the Church’s youth ministry.

Agatha Natania, 24, from Bogor Diocese in West Java, was among 20 members named on Nov. 24 by the Vatican’s Dicastery for Laity, Family and Life as joining its new International Youth Advisory Body.

Japan and India are also among Asian countries represented on the body.

The move is in response to a specific request in the final document of the 2018 Synod on Young People to reinforce work done by the Dicastery’s Youth Office.

A Dicastery statement said the young people appointed come from five continents and a number of international movements, associations and communities.

They were involved in different phases of the synodal process, including an International Youth Forum held by the Dicastery in June in Rome to encourage the implementation of Pope Francis’ post-synodal apostolic exhortation Christus Vivit.

The forum was attended by almost 250 young people from more than 100 countries.

They will serve as members of the advisory body for three years and have an important consultative and proposal-making role to play. They will assist the Dicastery with issues related to youth ministry and other topics of more general interest.

The body's first meeting is scheduled for April 2020 in Rome.

“I was so surprised,” Natania told ucanews, saying she had thanked God for giving her “the chance to represent young Indonesian people on the advisory body.”

“I was told earlier [by the Dicastery] I was among the nominees after they saw my determination in voicing young people’s concerns during the International Youth Forum,” Natania said

Natania, who graduated from the Parahyangan Catholic University in Bandung and can speak English, Italian and Spanish, said she talked about issues faced by Catholic young people in Indonesia during the forum.

“I told the forum that many youths want to develop themselves but problems often come from the establishment and older generations.,” she said.

Referring to Christus Vivit, she said she helped translate the apostolic exhortation from Italian to Indonesian.

“It is Pope Francis’ message of love to Catholic young people,” she said, adding that it encourages them to do many things without fear.

The document “Human Fraternity for World Peace and Living Together” was signed on Feb. 4 by Pope Francis and the grand imam of Al-Azhar, Ahmed el-Tayyeb, in Abu Dhabi during the papal visit to the United Arab Emirates.

It is meant to be a guide on advancing a culture of mutual respect among different religions.