An auxiliary bishop in central Vietnam has been named apostolic administrator of a northwestern diocese.

Pope Francis has approved Bishop John Mary Vu Tat of Hung Hoa stepping down and has appointed Auxiliary Bishop Peter Nguyen Van Vien of Vinh to apostolic administrator of the diocese, which is vacant and under the Holy See’s direction.

Father Joseph Dao Nguyen Vu, head of the office of the Catholic Bishops’ Conference of Vietnam, said on Aug. 29 that Archbishop Marek Zalewski, non-resident pontifical representative to Vietnam, had made the announcement.

An informed source said the episcopal nomination is unusual. It would be normal for the Vatican to appoint Bishop Vien as coadjutor bishop to succeed Bishop Tat, who reached the retirement age of 75 last year.

The source said the Vatican turned down an episcopal candidate introduced by Bishop Tat and suggested Bishop Vien, 55, who was not supported by Bishop Tat. As a result, the Holy See has compelling reasons to make this unusual decision.

“It will take some time for Bishop Vien to be named bishop of Hung Hoa,” the source said.

Dominic Dang Tien Lanh, a lay leader from Yen Bai province, said: “Local Catholics are dissatisfied with the piece of good news because they expected the Holy See to name a residential bishop to the diocese.”

Lanh, 66, said a residential bishop has full rights to bring sustainable development to the country’s largest diocese in terms of territory. The diocese covers part of Hanoi and nine provinces.

He said the nomination showed the Vatican’s carefulness and wisdom. Bishop Vien, who is from central Vietnam, needs time to acquaint himself with the northwestern people and cultures.

He warmly welcomed the new apostolic administrator and hoped the vacancy will only be for a short time. 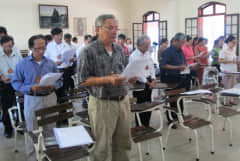 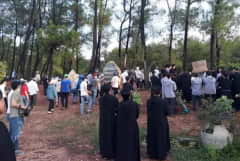 Mary Tran Thi Thuy, a catechist, said the word “administrator” reminds local Catholics about difficult times when they suffered a lack of facilities and personnel training.

The diocese was vacant and served by two priests as apostolic administrators from 1992 to 2003 when the Vatican named Bishop Anthony Vu Huy Chuong as its bishop.

“I pray to God to end the vacancy soon and give a bishop to the local Church so that he can deal with many problems and promote evangelization among remote areas,” Thuy said.

He said local Catholics are deeply grateful to Bishop Tat, who has restored facilities and fostered evangelization for the past 20 years in remote areas bordering China.

Born in 1944 in Son Tay province, Bishop Tat was ordained a priest in 1987 after completing philosophy and theology courses from two bishops for 10 years. He studied further in Rome and Paris before teaching at a seminary in Hanoi and serving parishes. He was named auxiliary bishop of Hung Hoa in 2010 and became its bishop the following year.

Bishop Vien, born in 1965 in Quang Binh province, was ordained a priest for Vinh Diocese in 1999. He furthered his theological studies in Australia from 2000 to 2009. He was named auxiliary bishop of Vinh in 2013. He serves as head of the episcopal commission for youth.