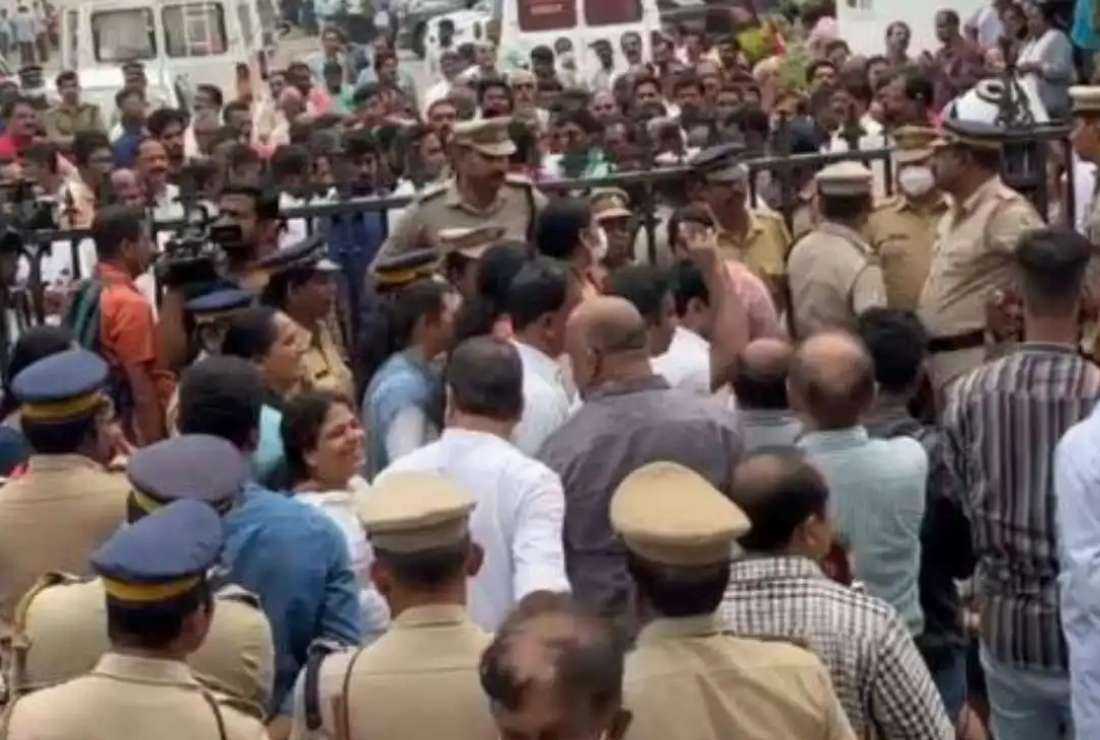 Police stand between supporters and opponents of Archbishop Andrews Thazhath, the apostolic administrator of the Ernakulam-Angamaly Archdiocese of the Syro-Malabar Church, at the gates of the St Mary's Cathedral Basilica in Ernakulam in the southern Indian state of Kerala on Nov. 27. (Photo supplied)

A top court in the southern Indian state of Kerala has ordered police protection for the apostolic administrator of an archdiocese in the Eastern rite Syro-Malabar Church, which is embroiled in a bitter liturgical dispute.

The Kerala High Court granted the request made by Archbishop Andrews Thazhath in his petition on Dec. 5.

The court also directed the police to remove the protesting priests and laity blocking his entry into the Archbishop’s House.

The Vatican appointed Archbishop Thazhath as the apostolic administrator of the Ernakulam-Angamaly Archdiocese on July 30 to settle the more than five-decades-old liturgy dispute over the adoption of a Synod-ordered Mass requiring the priests to face the altar during the Eucharistic prayer.

However, a group of priests and lay people in the archdiocese have taken control of the Archbishop’s House since Nov. 21 and refused his access to it.

The single bench of Justice Anu Sivaraman in a brief order termed those who are blocking the archbishop’s entry to the Archbishop's House as "miscreants or outsiders."

The ongoing liturgical dispute took an ugly turn when Archbishop Thazhath was denied entry inside the St Mary’s Cathedral Basilica to offer Mass on Nov. 27.

Archbishop Thazhath arrived at the cathedral ignoring caution from the parish priest and curia that people were agitated, archdiocesan priests say.

The prelate then headed for the Archbishop’s House where a mob that supported him broke open the main gates and vandalized furniture, portraits, and other objects.

“Even now, without any authority, certain persons who trespassed into Archbishop’s House continue to be there with an intention to obstruct the free movement of the petitioner,” Archbishop Thazhath stated in his petition.

The prelate said a complaint was lodged with the police and sought protection for “smooth ingress and egress into the Church (Cathedral) and the Archbishop’s House."

He further alleged in the petition that the police were not responding adequately to his request for protection as they were under the influence of Father Thalian and Davis.

Archbishop Thazhath said he is unable to discharge the duties assigned to him by the Vatican and hence, a majority of the believers “are in total darkness.”

Meanwhile, the ATM filed a police complaint against Archbishop Thazhath and 30 others alleging they had tried to forcibly enter the Archbishop’s House on Nov. 27.

The organization reportedly backed its claim with digital evidence such as video footage of the violent scenes at the Archbishop’s House.

The unruly mob left the spot only after police personnel stepped in and chased them away, it claimed.

All other 32 dioceses of this Church based in Kerala have complied with the directions of the synod to have the unified Mass, where priests turn to the altar during the Eucharistic prayer.

However, the majority of priests and lay people in the Ernakulam-Angamaly Archdiocese insist on continuing with an older Mass in which the priest faces the congregation throughout.

The warring group wants their traditional mode to be given a “liturgy variant status” and has threatened to break ties with the Catholic Church if the demand is not met.