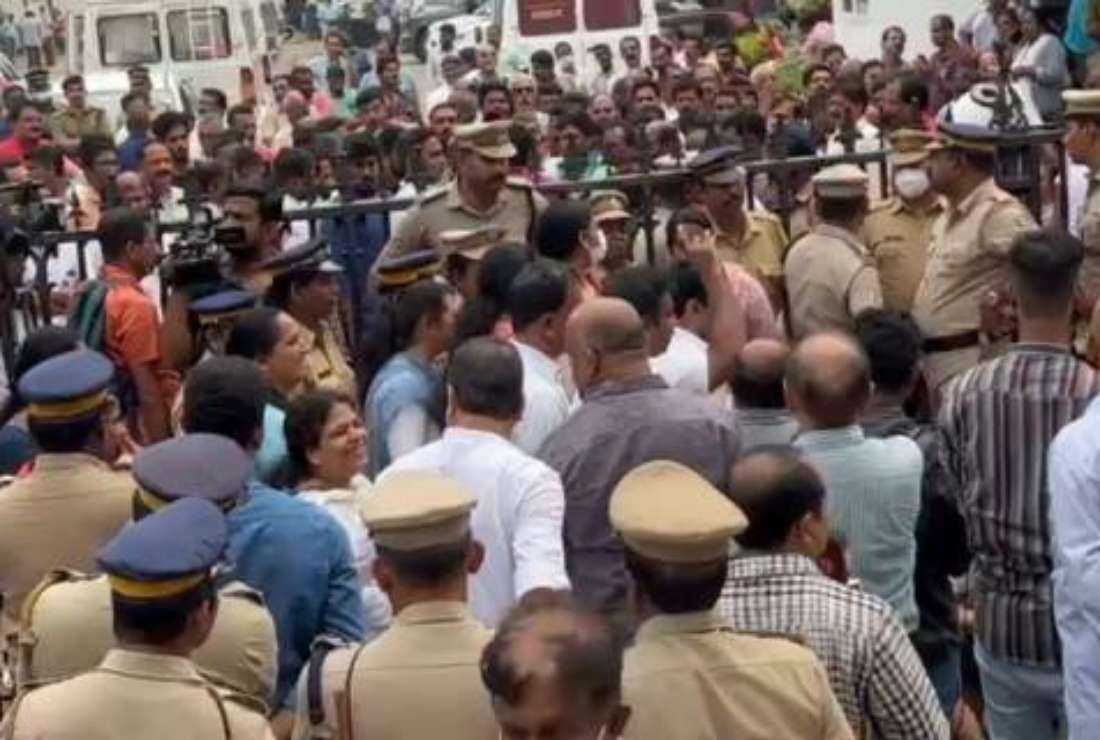 Police stand between supporters and opponents of Archbishop Andrews Thazhath, the apostolic administrator of the Ernakulam-Angamaly Archdiocese of the Syro-Malabar Church, at the gates of the St Mary's Cathedral Basilica in Ernakulam in the southern Indian state of Kerala on Nov. 27. (Photo supplied)

The Vatican-appointed administrator of the Ernakulam-Angamaly Archdiocese of the Syro-Malabar Church was denied entry to a cathedral by his opponents over an ongoing liturgical dispute.

Archbishop Andrews Thazhath arrived at the St Mary’s Basilica Cathedral Church for Sunday Mass on Nov. 27 but was stopped from entering its premises as the protesting laity from the archdiocese locked the gates.

The prelate had earlier announced that he would be offering Mass ushering in the liturgical celebrations of Advent in the mode approved by the Synod of Bishop ignoring the opposition to it by the priests and laity who insist on the traditional mode.

Police accompanying the prelate as a precaution did not let him get out of the car and after waiting for about 10 minutes they drove away to the Archbishop’s House.

Archbishop Thazhath’s supporters reportedly broke open its gates and tried to damage the property including a portrait of his predecessor Metropolitan Vicar Archbishop Antony Kariyil. Police intervened and chased away the troublemakers.

Riju Kanjookaran, the spokesperson of the Archdiocesan Movement for Transparency (AMT), described all this as “a deliberate act of arrogance from Archbishop Andrews Thazhath to sabotage the ongoing peace talk.”

The priests and laity at the archdiocese were openly opposed to the archbishop’s plans to facilitate the synod-approved Mass at the cathedral and insisted on continuing with the traditional Mass in which the celebrant faces the congregation throughout.

In the uniform Mass, dictated by the synod, the priest faces the congregation for the first half of the Mass and then faces away from them for the second half of the ceremonies.

This liturgical dispute dating back nearly five decades in the Oriental Church was revived in August last year after the synod insisted all its 35 dioceses follow the Mass approved by it for greater uniformity.

All other archdioceses complied after initial resistance, but the priests and laity at Ernakulam-Angamaly have persisted with their demand for granting recognition of the traditional Mass as a “liturgy variant” to end the stalemate.

Archbishop Thazath was appointed the apostolic administrator on July 30 to settle the row, but his autocratic style has led to the archdiocese threatening to break away from the Catholic Church.

Sensing trouble, the permanent Synod of the Syro-Malabar Church on Nov. 24 held an emergency meeting and appointed a three-member panel of bishops to initiate a dialogue with the protesting priests and lay people.

The panel consisting of Archbishop Mathew Moolakkatt, Archbishop Joseph Pamplany, and Bishop Jose Chittooparambil met with the leaders of the protesting lot on Nov. 25.

Though nothing was officially disclosed about what transpired at the meeting, the protestors said that “it was more or less a cordial” and they would continue to have a dialogue.

It is feared now that “Sunday’s fiasco with Archbishop Thazhath” could derail the peace process.

Father Antony Vadakkekara, the spokesperson of the Syro-Malabar Church, dismissed such fears saying, “We will explore all possible ways and means to ensure peace and harmony."

The dialogue will continue and there is no question of going back on it, he told UCA News on Nov. 28.

“The apostolic administrator is the vicar of the Cathedral and he went there to offer Mass in accordance with prior notice given to the parish priest. Since there was opposition from the people, he returned without creating any trouble,” the priest said.

Father Vadakkekara though said that nobody should block entry to the Archbishop’s House, which serves as the official residence of the apostolic administrator.

“This is not justified,” he said.