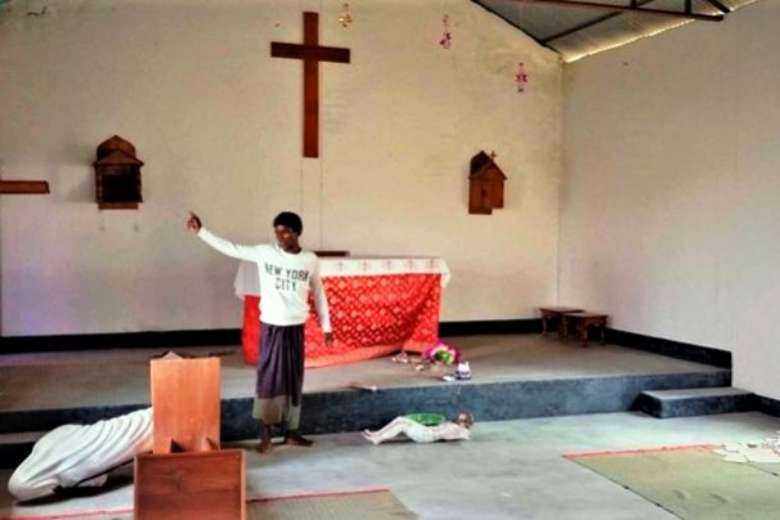 The damaged interior of Mother Teresa Church after it was vandalized by a Muslim youth on April 3. (Photo: Facebook)

Catholics in Bangladesh’s Rajshahi Diocese are feeling anxious after a miscreant entered a church and desecrated statues of Jesus, Mother Mary and St. Teresa on April 3.

Police arrested Jannatul Ferdous, 22, for breaking into Mother Teresa Church in Joypurhat district and wrecking the statues besides a copy of the Bible.

The arrested Muslim youth is mentally challenged, people from his village claimed, but police said they were investigating the incident and will initiate legal action.

Speaking to the diocesan online portal Borendradut.com, Bishop Gervas Rozario of Rajshahi strongly condemned the incident and demanded strict action against the culprit

“Don’t be afraid, don’t be discouraged,” appealed the bishop, who is also president of the Peace and Justice Commission of Catholic bishops in Bangladesh.

“Go forward without fear. God is with us and he will save you. Every person in Bangladesh has the right to practice their religion freely and that freedom is given in the constitution. None of us are above the law,” he added.

“We want to know who actually wants to destroy the religious harmony in our neighborhood. The residents of the village are in panic and want strict action in the matter”

But local Christians expressed their apprehensions after the incident. “We never thought anybody would enter the church and damage the holy statues of Jesus, Mother Mary and St. Teresa,” said Subash Murmu, a Catholic leader of the church committee.

He told UCA News that local Catholics had urged the police to identify the people supporting the arrested Muslim youth. “We want to know who actually wants to destroy the religious harmony in our neighborhood. The residents of the village are in panic and want strict action in the matter,” Murmu told UCA News.

Bangladesh was known as a moderate Muslim-majority country until a decade ago. However, since 2013 it has seen an upsurge in Islamic militancy that has so far claimed the lives of 50 people.

Four Christian clergy including an Italian Catholic priest were attacked and two Christians were murdered by militants, while dozens have received death threats in the South Asian country.

An estimated 600,000 Christians live in Bangladesh, whose population is estimated to be 162 million. The Catholic community, with some 400,000 members, is the single largest Christian group.

ROSALINE COSTA
The Catholic Church hierarchies in collaboration with the local Christians and also people from other faiths should protest this incident strongly before these "mentally sick" people destroy other churches and and the houses of the Christians. The government should be sensitive to this kind of incidents and without any partiality or preferences of excuses, the culprit/s should be punished as per law and stop such vandalisms in Bangladesh.
Reply