This picture taken on June 26 shows police patrolling as Muslims leaving the Id Kah Mosque after the morning prayer on Eid al-Fitr in the old town of Kashgar in China's Xinjiang Uyghur Autonomous Region. Analysts are warning that Xinjiang is becoming an open-air prison. (Photo by Johannes Eisele/AFP)

At least 12 Uyghur students in Egypt were arrested and deported back to China last month, showing how far-reaching China's arm is when it comes to keeping a grip on the beleaguered Muslim minority.

Since July, there have reportedly been 150 Uyghur students in Egypt rounded up for alleged irregularities in their residency papers. The students were studying religious education at Al-Azhar University and learning about Islam, which is heavily restricted in Xinjiang.

Media reports said that at least 12 students were deported to China on July 6. Since then it is unsure how many have additionally been sent back to China but reports suggest it may be over 20 more.

The Chinese government has ramped up a battle in Xinjiang against so-called religious extremism, linking it with acts of terrorism. As part of those increased security measures, the government has put pressure on Uyghur students abroad to return to China.

The government has detained some of the students' relatives and used other scare tactics — as well as put pressure on the Egyptian government — along with sending security agents there, according to Amnesty International.

Uyghurs who are returned to Xinjiang face arbitrary detention, unfair trials, torture and other ill-treatment, according to the rights group.

"Of the people who have been deported from Egypt to China, no one has heard from them or know where they are. They have essentially vanished," Nee said.

Meenakshi Ganguly, South Asia Director at Human Rights Watch, said Egypt's government should take into account that Uyghurs are often escaping serious abuses and discrimination by the Chinese authorities — and essentially need to consider if they are seeking asylum.

"Egypt is obliged to ensure that no one in its custody is forcibly sent to a place where they would risk being subjected to persecution, torture, or other serious human rights violations," Ganguly said. "It should instead provide the Uyghurs with access to legal assistance and to officials of the United Nations High Commissioner for Refugees," she said. 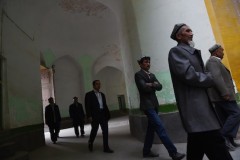 Fears of Uyghur deportation abroad are not just isolated in Egypt. Italian authorities detained a prominent Uyghur activist, Dolkun Isa, on July 28 at the request of the Chinese government. In July 2015, more than 100 asylum-seeking Uyghurs were repatriated to China from Thailand, when the country caved in to pressure from Beijing.

"Considering China's growing clout and influence, many governments seem willing to flout international refugee laws and to ignore the entreaties of refugees not to be sent back," Ganguly said.

Meanwhile, Turkish Foreign Minister Mevlut Cavusoglu on Aug. 3 agreed that Turkey will eliminate any media reports that are anti-China — a move said to step up cooperation with China in stamping out perceived acts of terrorism in Xinjiang and tightening joint security efforts.

There is a large Uyghur population in Turkey — however, the country is becoming increasingly unfriendly to the minority population under President Recep Tayyip Erdogan. The new muzzle on media reports is believed to directly target that Uyghur population, which is large but remains mostly uncounted. Beijing holds the stance that some Uyghurs use Turkey as a stopover point to become Muslim extremist fighters in the Middle East.

"The Chinese government primarily views problems in the Xinjiang as coming from outside of China, to some extent, because authorities are unwilling to acknowledge that their own harsh security measures and discriminatory policies towards Uyghurs have backfired," Nee said.

China and Turkey have become cozier since the One Belt One Road initiative, which is a large-scale economic corridor under President Xi Jinping's administration linking Beijing with the Middle East. Much of the project's major infrastructure cuts through Xinjiang.

Al-Azhar University, where the Chinese Uyghur students were rounded up in Cairo, is a prestigious university for religious education. It has long attracted Chinese students to study in what is now for China a highly strategic country in the One Belt One Road initiative.