William Grimm, a native of New York City, is a missioner and presbyter who since 1973 has served in Japan, Hong Kong and Cambodia.
USCCB – The US Conference of Crocodilian Bishops
Published: June 25, 2021 03:17 PM The German-born American cartoonist Thomas Nast (1840-1902) invented the elephant as the symbol of the Republican Party and popularized the use of the donkey to represent the Democrats. We owe our image of Santa Claus to Thomas Nast in the 1860s.

Nast, though baptized in infancy as a Catholic, was anti-Catholic .His 1871 cartoon The American River Ganges, slightly edited and republished in 1875, is probably the most famous of the many 19th-century American anti-Catholic cartoons.The picture shows bishops as crocodiles coming ashore to attack children. Nowadays that cartoon has been reworked many times because of the extent to which bishops enabled and covered up the sexual abuse of children.
Donate to UCA News with a small contribution of your choice
Nast, along with many other Americans even into the 20th century, believed that Catholicism presented a threat to democracy and the American form of government.John Kennedy, who in 1960 became the first Catholic in the White House, had to face and face down claims that he would be a pawn of the bishops and the Vatican.Now, we are seeing an attempt to make those hitherto-unfounded fears come true as crocodilian bishops come ashore in an attempt to push theocracy.The United States Conference of Catholic Bishops at a virtual meeting have voted by a huge majority to prepare a document on the Eucharist in spite of being  asked by the Vatican to exercise constraint in the matter.The move is a further step in ongoing attacks by many bishops upon political figures such as President Joseph Biden and Speaker of the House of Representatives Nancy Pelosi, both of whom are practicing Catholics and both of whom are leaders of the Democratic Party that supports access to abortion.[An interesting side note: the three co-equal branches of government in a country with a history of virulent and sometimes violent anti-Catholicism are now each led by a Catholic, with Chief Justice John Roberts as head of the judicial branch.]Christianity from its earliest days has considered abortion to be evil, as in the Didache, a text that is thought to predate parts of the New Testament:  “You shall not murder a child by abortion, nor kill a child at birth.”Biden has said that he holds that conviction, but as a leader in a democracy, neither politically nor practically can he force it upon the nation. Pelosi seems more “political” on the issue, sidestepping opportunities to declare herself.What do the bishops expect to achieve? What do they expect these politicians to achieve? Do they think that by forcing Catholics to denounce the policies of their party they can override the electorate? Do they expect to end abortion by their actions?Abortion is evil. But would refusing the Eucharist to Catholics in public life make any difference in the prevalence of abortion? The bishops would instead produce an electorate that will not put Catholics in positions of governance because it no longer trusts Catholics to respect the will of the people.With no Catholics in government, there would be less likelihood that other Catholic concerns such as capital punishment, racial justice, nuclear weapons, health care or poverty will be addressed, since the party the bishops’ move favors is counter to those and, as is increasingly obvious, against democracy itself as it tries to suppress the votes of those who disagree with it.Some of the bishops calling for sanctions on politicians are open supporters of that party, in at least one case going so far as to join the “Big Lie” that the election that put Biden in office was “stolen.”The bishops appear to think that they should force the Church’s teaching against abortion upon the nation, whether or not the nation agrees. In other words, the bishops want clerical veto power over the expressed will of the people, a theocracy rather than a democracy.So, because the American bishops have failed to influence their society on the matter of abortion, they want to override the democratic system and replace it with themselves as a Catholic version of the ayatollahs who rule Iran by vetting candidates and policies.Of course, their scheme is doomed to failure.Unless those “weaponizing the Eucharist” can get their fellow bishops to unanimously agree, anything they come up with must be approved by the Vatican that already told them to slow down.Another and ultimately bigger problem for them is that they are accelerating the loss of influence, respect and members that the Catholic Church in the United States is already experiencing.They will not be seen as champions of the unborn when their record with the already born is so dismal. Butting up against democracy by attacking politicians will not turn that loss into a win.The ability of the Catholic Church in the United States to proclaim the gospel is not threatened by a few politicians who juggle personal faith with public duties. The threat comes from turning into a cult of crocodilian cranks. 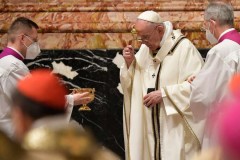