US woman convicted in Bali 'suitcase murder' to be deported

Heather Mack was freed from prison early for good behavior 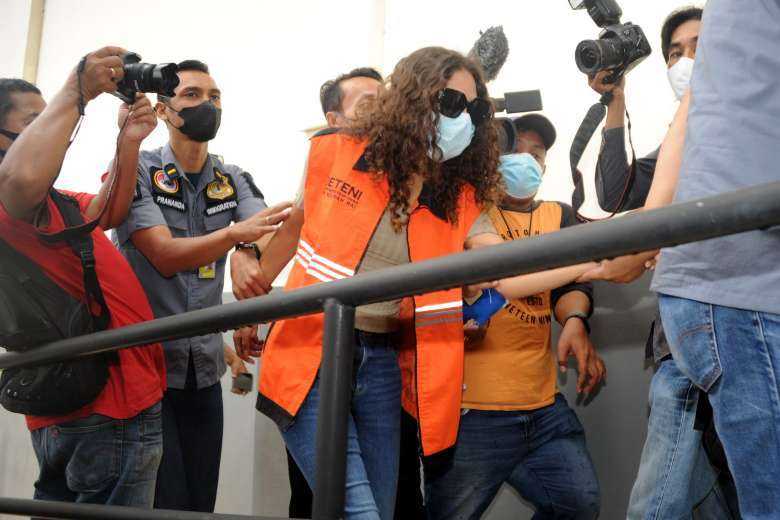 Heather Mack (center) of the US is escorted by immigration guards to the immigration detention house in Jimbaran on the resort island of Bali on Oct. 29. (Photo: AFP)

American Heather Mack, convicted as a pregnant teenager of helping to kill her mother at an Indonesian luxury hotel, was to be deported today along with her now six-year-old daughter, immigration officials said.

Mack, 25, was released from a Bali prison last week, nearly three years early for good behavior, and was set to be flown to the United States.

In a case dubbed the "suitcase murder", Mack was handed a 10-year jail term in 2015 while her boyfriend Tommy Schaefer got 18 years for the murder of Chicago socialite Sheila von Wiese Mack on the holiday island of Bali.

Schaefer, the father of Mack's child, beat the 62-year-old victim to death with a fruit bowl during an argument at the five-star St. Regis resort.

The couple then stuffed the woman's body into a suitcase and tried to flee with it in a taxi, but quickly abandoned the blood-soaked luggage.

The 2014 murder shook the usually sedate holiday island, with details of the grisly killing emerging during the closely followed trial

Mack, who was pregnant at the time of the crime, was found guilty on a lesser charge of assisting in the murder.

Earlier, Mack's lawyer told AFP that she did not want her daughter to be deported and "hounded by the (US) media".

Since the pandemic began, Mack — now fluent in Indonesian and Balinese — had only video contact with her daughter, a prison official said earlier.

The 2014 murder shook the usually sedate holiday island, with details of the grisly killing emerging during the closely followed trial.

The court heard how von Wiese Mack's badly beaten body was discovered in the taxi outside the ritzy hotel where she had been staying with her daughter and Schaefer.

The couple had fled to another part of Bali, where police arrested them.

Schaefer, who remains in prison, confessed to the killing during his trial but claimed he was defending himself during an argument with von Wiese Mack, who was unhappy that her daughter was pregnant.

Prosecutors alleged that Schaefer "blindly hit" von Wiese Mack with the fruit bowl in a fit of rage after she hurled a racial slur at Schaefer, who is black.

During the attack, Mack hid in a bathroom but later helped Schaefer stuff the body into a suitcase, the trial heard.

The sentencing judge described the killing as "sadistic".

Locals and foreigners alike were horrified at the rare murder on Bali, a pocket of Hinduism in Muslim-majority Indonesia famed for its palm-fringed beaches.