Way ahead uncertain but observer claims an improvement in relations 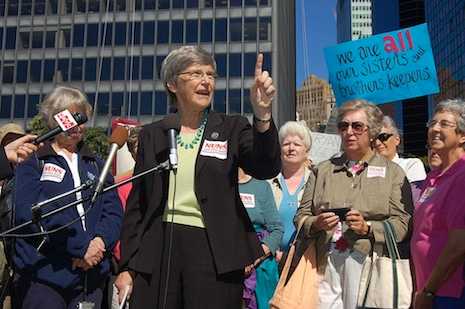 By Mark I. Pinsky for Religion News Service

U.S. Catholic nuns — accused by Rome of “radical feminism” for advocating social justice at the expense of issues such as abortion, gay marriage and euthanasia — responded to a Vatican knuckle rapping with a brief, conciliatory statement on Monday (Aug. 19).

After its four-day annual assembly, the board of the Leadership Conference of Women Religious, which represents 80 percent of the nation’s 57,000 sisters, emphasized the positive, and remained tight-lipped about negotiations to resolve the investigation.

Referring to closed sessions with Seattle Archbishop J. Peter Sartain, named by the Vatican’s Congregation for the Doctrine of the Faith to implement Rome’s “doctrinal assessment,” the sisters said:

“The session with Archbishop Sartain allowed a profound and honest sharing of views. … Although we remain uncertain as to how our work with the bishop delegates will proceed, we maintain hope that continued conversations of this depth will lead to a resolution of this situation that maintains the integrity of LCWR and is healthy for the whole church.”

It’s unclear whether the nuns’ gentle words will be sufficient to turn away the wrath of the church’s hierarchy.

In brief public remarks, Sartain told the nuns he came to the gathering as a “brother and a friend.”

The Rev. Thomas Reese, a senior analyst for the National Catholic Reporter, said the tone was far less confrontational than in the past.

“Things could have been much worse after the meeting, and that clearly didn’t happen,” he said. “From their press release, they’re saying that things improved slightly — which is good news. Because both sides seemed to have listened and understood each other during the meeting.”