US presidential election stirs up unusual headlines in India

No matter who wins, Modi's government will undoubtedly reach out to Washington soon after the polls 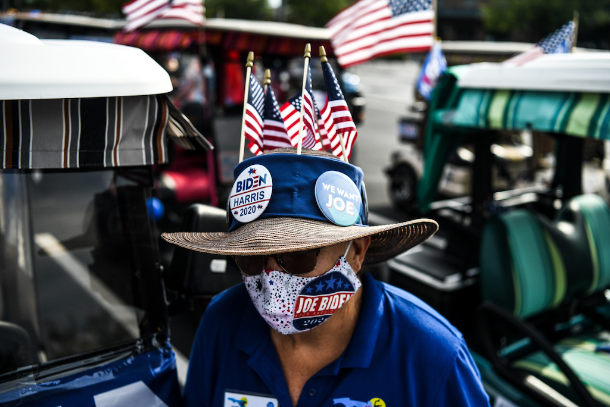 Florida residents take part in a golf cart parade on Aug. 21 to celebrate the nomination of Joe Biden for Democratic presidential candidate and Kamala Harris for vice president. (Photo: AFP)

It is usual that global media celebrate the US presidential election because of the geopolitical and economic influence that Capitol Hill exerts on the world. The reportage of the November election, however, is gathering more steam than usual in India.

Some sections of the media say the nomination of Kamala Harris, whose mother is a migrant Indian, as the Democrats' vice president candidate could sway substantial votes of Asian Americans against Republican President Donald Trump.While that remains nothing more than an expectation, social media discussion presents Harris' nomination as Joe Biden's running mate as the "blossoming of the American lotus," giving it a pro-Hindu tint.The name Kamala in Sanskrit means lotus. Paradoxically, the lotus is also the electoral symbol of Prime Minister Narendra Modi's pro-Hindu Bharatiya Janata Party (BJP).Discussion on the blossoming of the American lotus, however ridiculous and silly it may be, shows the eagerness of a politically motivated group in India to connect every success in the world with their party.

Get it Now
Kamala Harris has hardly anything to do with India except that she is the daughter of cancer biologist Shyamala Gopalan, who migrated from the southern Indian city of Chennai. Her father is a Jamaican migrant. It is natural if some American Indians live vicariously through her half-Indian status.Indeed, during the Modi regime, India-US relations have improved. The Modi-Trump bond has enhanced strategic ties in bilateral relations. The question now is this: Will the November election make things tougher for pro-Hindu forces in India?The Modi government has got almost a free pass from the American establishment under right-winger Trump on human rights and religious minorities, including Christians and Muslims.Trump and Modi share equal hatred toward Muslims. In 2002, Modi, as Gujarat state chief minister, came under severe criticism for anti-Muslim carnage that killed hundreds of Muslims including women and children. Trump's hatred toward Muslims and the sinister rhetoric are also well known.Under President Trump, the US has almost turned a blind eye to the Indian government's policy toward religious minorities. On Aug. 5, 2019, the Modi government, guided by his party's electoral promise and the jingoism of a hardline Hindutva cult, abolished the semi-autonomous status of Muslim-majority Kashmir's special privileges.
Related News "Kamala Harris is a strong supporter of human rights and the rights of Kashmiris. She opposes bullies like Modi … Half south Indian, Kamala is the best choice" for vice president, tweeted one Tony Ashai, whose Twitter profile describes him as a Kashmiri-American architect and designer. Harris' support for Kashmir is sure to attract some votes, as expressed in another tweet. She "is the favorite candidate of those who wants to break my ancestral homeland of Kashmir away from India. Kashmir is the seat of Hindu spirituality. I can't support any candidate who goes to bat for Kashmiri terrorists," it said.

The Democrats are projected as those fighting Trump's anti-Muslim and pro-corporate approach. However, some experts feel a strong Indo-US tie prevails, and it will continue, no matter who comes to power."The Indo-US bond will be hardly affected even if Kamala Harris becomes vice president," BJP leader Virendra Sachdeva told UCA News. "We had good ties during Barack Obama, and it only improved when Trump took charge." But Kamala Harris has strongly opposed the Modi government's decision on Kashmir. When progressive American lawmaker Pramila Jayapal — a Democrat — introduced a US House resolution urging India to uphold human rights in Kashmir, Harris tweeted: "I stand with Jayapal, and I am glad her colleagues in the House did too."In September 2019, Harris was more vocal, stating: "Kashmiris are not alone. We are all watching. So often, when we see human rights abuses ... the abuser will convince those that they abuse that nobody cares and that nobody's watching."In the last six years of the Modi regime, critics say, India has diluted its commitment to the principles that upheld the rights of religious minorities. In 2019, Modi was given a second term to run the world's largest democracy. But political rivals, including Congress and communists, said India's march toward Hindu majoritarianism is a near-fatal situation for Christians and Muslims.Regular media reports from across India highlight the arbitrariness and high-handedness of law enforcement agencies against religious minorities."There is hope among India's minorities that once the Joe Biden-Kamala Harris duo comes to power, some of the wrong policies of the American government toward immigrants and Muslims will end. This will have an impact in India too," said Ilyas Qureshi, leader of the opposition Congress party.India houses 180 million Muslims in a country of 130 billion people. Christians are a negligible 2.3 percent, forming the second-largest minority.However, insiders in the ruling BJP and those involved in foreign policy say that the Modi government will undoubtedly reach out to Washington soon after the election.