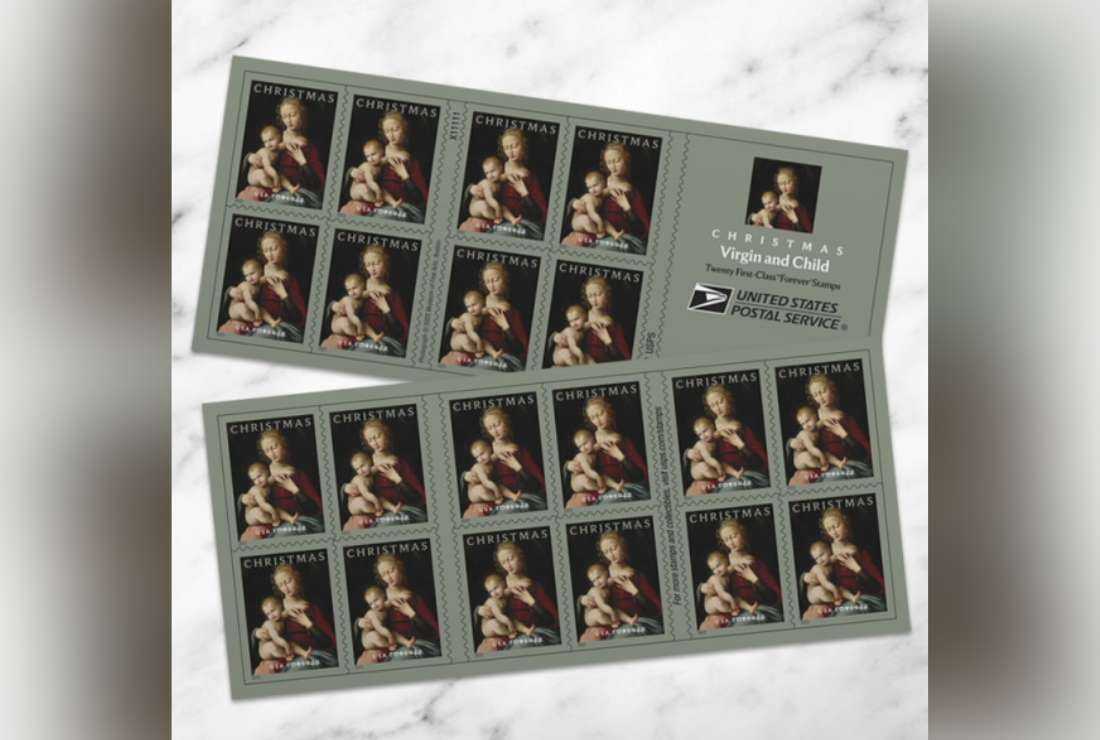 This U.S. Postal Service stamp features Virgin and Child, an oil-on-panel painting from the first half of the 16th century. (Photo: USPS.com)

Every two years the U.S. Postal Service issues a traditional first-class Christmas stamp showing Mary and Jesus, and this year's stamp features an oil-on-panel painting from the first half of the 16th century titled "Virgin and Child."

Attributed to a Florentine artist known since the late 1960s as the Master of the Scandicci Lamentation, the painting is in the Robert Dawson Evans Collection at the Museum of Fine Arts in Boston.

The stamp was designed by Greg Breeding, co-founder and creative director of the Journey Group design firm in Charlottesville, Virginia. He is one of four art directors who regularly work with the USPS.

The painting depicts Mary gazing downward at the Christ child, with one of her arms holding him protectively at his waist and the other tenderly touching his arm, while the Christ child turns his head to look out of the frame to the left.

"I am honored to represent the Postal Service as we dedicate a Christmas stamp that features one of the most revered images in the world -- the Virgin Mary holding her infant child, Jesus," Jenny Utterback, USPS organization development vice president, said when the stamp was unveiled Sept. 22 at the Boston museum.

The Postal Service has released religion-themed stamps since the 1960s.

The 2022 religious Christmas stamp is "a beautiful piece of art, with particular meaning this time of year," Utterback said.

"I choose my holiday cards with care, sign them with love or best wishes, and may write a personal note inside," she added. "Holiday cards are a special way to connect with family and friends. The stamp on the envelope holds significance as well."

"Virgin and Child" is a first-class, 60-cent stamp. It carries the "forever" designation, as do the other new releases from the USPS for the 2022 holiday season: "Holiday Elves," "Snowy Beauty," "Winter Blooms," "Hanukkah" and "Kwanzaa." The USPS said popular holiday stamps from years past also continue to be available.

The new Hanukkah stamp features a bright, multicolored menorah, or "hanukkiah," which is a nine-branched candelabrum lit during the eight-day Jewish holiday of Hanukkah. Also known as the festival of the lights, Hanukkah is Dec. 18-26.

It commemorates the miraculous victory of Judah Maccabee and a small group of Jewish freedom fighters who defeated their vastly more powerful Syrian oppressors in the second century B.C., regaining control of the temple in Jerusalem and the freedom to practice their religion.

The stamp for Kwanzaa, celebrated Dec. 26-Jan. 1, depicts two children standing together with a "kinara," or candleholder, and seven lit candles, called "mishumaa saba," in front of them.