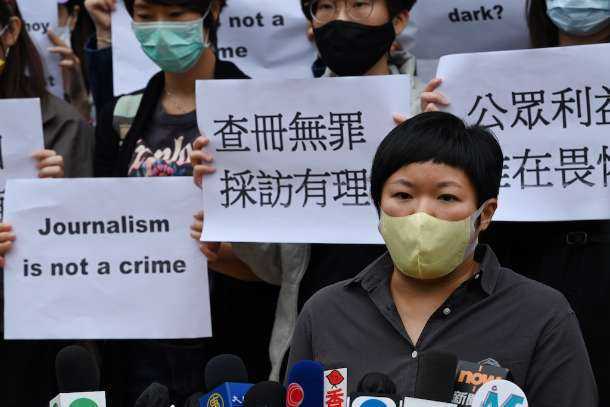 Radio Television Hong Kong producer Choy Yuk-ling, who was arrested for making a false statement linked to a documentary she co-produced investigating an attack on democracy supporters by government loyalists in 2019, speaks to the media after arriving at Fanling Magistrates' Court in Hong Kong on Nov. 10. (Photo: AFP)

The United States has imposed sanctions on four Chinese officials in Hong Kong over the implementation of the new national security law and their alleged role in crushing political opposition in the former British colony.

The US Treasury and State Department named the four as Deng Zhonghua, deputy director of the Hong Kong and Macau Affairs Office, Edwina Lau, deputy commissioner of police, and Li Jiangzhou and Li Kwai-wah, two officials from the national security office in Hong Kong.

US Secretary of State Mike Pompeo said sanctions were imposed for their role in implementing Hong Kong's national security law and that they would be barred from traveling to the United States and all US-related assets would be blocked.

“These actions underscore US resolve to hold accountable key figures that are actively eviscerating the freedoms of the people of Hong Kong and undermining Hong Kong’s autonomy,” he said.

“This is unacceptable, this is absolutely unacceptable. This is a blatant, grossly outrageous — I would use the word barbaric — interference in Hong Kong’s internal affairs,” Cheung told a press briefing.

“We are doing our job to protect and safeguard Hong Kong’s security and national security. It is incumbent upon Hong Kong’s officials to do that. It is our obligation, we are obliged to do it. We should do it.”

That includes Cambodia, where the US has stepped up diplomatic pressure on Beijing and sanctioned the Union Development Group over the seizure of land in a US$3.8 billion property development at Dara Sakor on the southwest coast of Cambodia.

It was the first time a Chinese company had been sanctioned for human rights in Cambodia, where China has invested billions of dollars and emerged as the tiny country’s main benefactor.

In Hong Kong, Washington has labeled Beijing’s enactment of the national security law as an unacceptable breach of China's “one country, two systems” framework and commitments to the territory under an agreement struck with Britain guaranteeing 50 years of autonomy.

It has also warned that international financial institutions could also be sanctioned for doing business with individuals it says are responsible for carrying out Beijing’s crackdown in Hong Kong.

The latest sanctions were also the first imposed under President-elect Joe Biden following the Nov. 3 election in which President Donald Trump has not conceded defeat.

“We are not going to be intimidated by any of these actions. In fact, this is clearly a breach of international practice,” Cheung added.