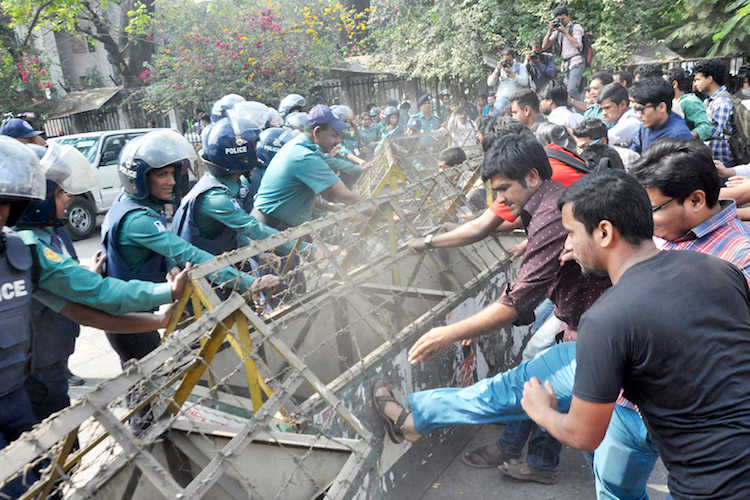 Secularists and progressives in Dhaka try to break a police barricade in January 2017 in a protest against the Islamization of school textbooks. (Photo by Stephan Uttom/ucanews.com)

A Bangladeshi government minister has trashed the latest U.S. State Department report on human rights in the country as baseless, but rights activists and church officials say the report sheds lights on worsening violations.

The Bangladesh 2017 Human Rights Report, published April 20, said the most significant issues included extrajudicial killings, torture, arbitrary or unlawful detentions and forced disappearances by security forces, restrictions on civil liberties including freedom of speech, the media and the activities of non-government organizations (NGOs).

The state has also failed to address a lack of freedom to participate in the political process or to curb corruption, violence and discrimination based on gender, religion, caste, tribe including indigenous persons, and sexual orientation, the report said.

Human trafficking, workers' rights and child labor were among the most serious problems. Security forces enjoyed widespread impunity for abuses and limited measures were taken to investigate and prosecute cases of abuse and killings by security forces.

"We reject the report as it was prepared without taking opinions, especially from the information, law and home ministries," Haq told reporters on April 22. "The government does not support extrajudicial killings and therefore action would be taken against those involved in such killings."

Father Anthony Sen, convener of the Justice and Peace Commission in Dinajpur Diocese, said the government is denying the facts for political interests.

"The government knows everything yet continues to deny as extrajudicial killings are mostly politically motivated. Restrictions on NGOs, freedom of speech, endemic corruption and abuses of human rights, especially those of minorities, are rampant," Father Sen told ucanews.com.

Nur Khan, a prominent rights advocate, said the government was lying about the report's findings.