US hits general with sanctions over Rohingya atrocities 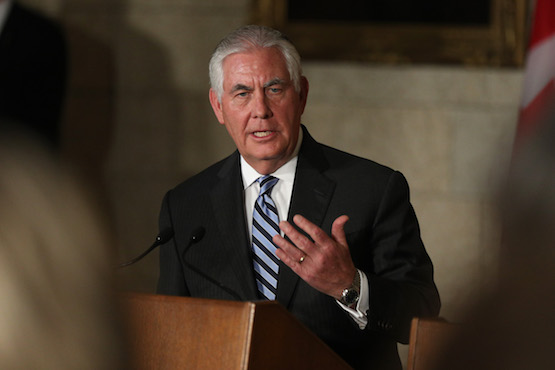 The United States has imposed sanctions against General Maung Maung Soe, former western commander of the Myanmar military, for his role in atrocities against Rohingya.

The U.S. State Department said that they had examined credible evidence of Maung Maung Soe’s activities, including allegations of Myanmar security forces involvement in extrajudicial killings, sexual violence and arbitrary arrests as well as the widespread burning of villages.

"Today’s announcement of sanctions demonstrates the United States will continue to pursue tangible and significant consequences for those who commit serious human rights abuse and engage in corruption," U.S. Secretary of State Rex Tillerson said in a statement on Dec. 21.

The sanctions are the first imposed under a U.S. law called the Global Magnitsky Human Rights Accountability Act, which was enacted last year.

They freeze any assets the sanctioned individuals and entities may hold under U.S. jurisdiction and block Americans from dealing with them, effectively cutting them off from the global financial system. Spirituality in the time of Pope Francis

Maung Maung Soe was one of  52  individuals and entities world-wide targeted by the U.S. over human rights abuses and corruption allegations.

The general oversaw the clearance operation in Rakhine State that forced more than 650,000 Muslim Rohingya to flee into neighboring Bangladesh which the United Nations and the U.S.  termed "ethnic cleansing."

The Myanmar military has denied all allegations of rapes and killings committed by security forces.

Days before Tillerson visited Myanmar on Nov. 15, military brass removed Maung Maung Soe as head of the western command and transferred him to military headquarters in Naypyidaw in a "reserve" capacity. No reason was given for the transfer.

Both the military and government were not available for comment on the sanctions.

Khin Zaw Win, director of the Yangon-based Tampadipa Institute, said the move was not unexpected as the U.S. Congress had already considered Myanmar and General Maung Maung Soe for sanctions.

"In terms of the Rakhine crisis, Myanmar’s reputation and image has already been tarnished around the world no matter whether there are U.S. sanctions against Myanmar or not. The U.S. move is specific and targeted at an individual so it may not affect the country’s business and reform agenda. But foreign investment may not come quickly due to the Rakhine issue," Khin Zaw Win told ucanews.com.

Kyaw Min, chairman of the Democracy and Human Rights Rohingya party, said the U.S. appeared to be careful in not imposing general sanctions against Myanmar, which could affect the relationship between Suu Kyi’s government and the military.

"The key thing is for the country’s leaders, such as government and the military, to have a willingness to tackle the Rohingya issue," Kyaw Min told ucanews.com.

The government said Yanghee Lee was "not impartial and objective", but Lee said the decision suggested "something awful" happening in the country.

"The government has repeatedly denied violations of human rights are occurring throughout Myanmar, particularly in Rakhine State. They have said that they have nothing to hide, but their lack of cooperation with my mandate and the fact-finding mission suggests otherwise," Lee said in a statement on Dec. 20.

On Dec. 19, Myanmar and Bangladesh established a joint working group to oversee the voluntary repatriation of around 700,000 Rohingya refugees starting from Jan. 23.

It comprises 15 members from each country and was established under the terms and conditions of the bilateral arrangement between Myanmar and Bangladesh signed on Nov. 23 according to the Dhaka Tribune report.

Ranjoin Francis Rozario, assistant executive director of Caritas Bangladesh, said Rohingya continued to flee to Bangladesh, which indicated Myanmar was not sincere about securing peace in Rakhine for repatriation to proceed.

"If Myanmar is committed to ensure rights of Rohingyas, why are many still coming to Bangladesh to save lives?" said Abdul Kalam, 44, in Balukhali refugee camp,  Cox’s Bazar, who left with his family in late 2016.

"Without a promise of granting citizenship and rights, Rohingyas won’t go back there. It is better to die here in Bangladesh than in Myanmar."