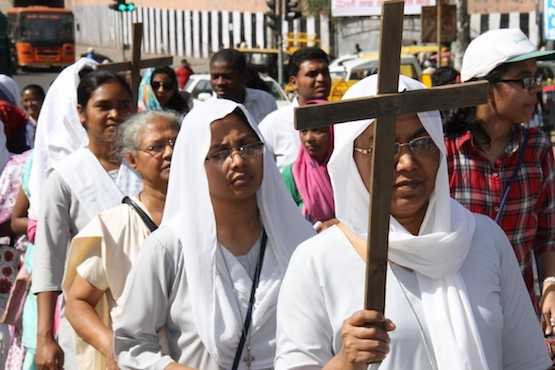 Catholics in Delhi Archdiocese pray during a rally on Palm Sunday April 9. A recent U.S. report says violence by "cow protection" groups have led to a deterioration of religious freedom in India. (ucanews.com photo)

The United States' religious freedom report has expressed concern over violence by Indian cow protection groups amid a deterioration of religious tolerance.

They had perpetrated numerous acts of intimidation, harassment and violence against religious minority communities and Dalits.

"What is frightening is those who are in the government are keeping silent," Father Singh said. "It is also a reflection of a collapse of law and order."

Samuel Jaikumar, of the National Council of Churches in India, welcomed the report, but noted it had focused on physical violence rather than structural and symbolic violence which has more impact on the community.

The U.S. report placed India in the category of Tier 2 countries, where religious freedom violations are considered to be serious. The nation has remained in this category since 2009.

The report also took issue with various activities by government officials, which infringed on the rights of religious minorities.

It noted that 24 out of the 29 Indian states had passed laws significantly restricting or banning cow slaughter, economically marginalizing Muslims and Dalits, many of who work in the beef or leather industries.

"These laws create a hostile and, on occasion, violent environment for religious minority communities," it added.

Earlier this year, a Muslim man was killed in Rajasthan state by a Hindu mob after they attacked his cattle truck. It was later learned that the deceased was a dairyman returning home after purchasing cows.

Joseph Dias, founder of the Catholic Secular Forum, told ucanews.com that feelings of insecurity are prevalent among minorities. The government needed to do much more to combat cow protection militias, he said.

"They use cow protection as a front to carry out illegal and nefarious activities endangering the lives and properties of people," Dias said.

The U.S. report highlighted that Christian communities across all denominations reported numerous incidents of harassment and attacks in 2016, which they attributed to Hindu nationalist groups supported by the ruling BJP.

According to a study by the forum earlier this year, some 12,000 Indian Christians experienced persecution in 2016 including murder, detention, assault, rape and harassment.

Christians and Muslims form part of the minority communities in India, comprising 2.3 percent and 13.4 percent respectively of the total 1.2 billion Indian population. Hindus are in the majority with 80.5 per cent of the population.

The U.S. report also noted that even though Prime Minister Narendra Modi spoke publicly about the importance of communal tolerance and religious freedom, "members of the ruling party have ties to Hindu nationalist groups implicated in religious freedom violations."

"Although the government of India established special structures to investigate and adjudicate crimes stemming from these incidents, the impact has been hindered by limited capacity, an antiquated judiciary system, inconsistent use, political corruption, and religious bias," it said.

The report noted that incidents of communal violence tended to occur more in 10 out of the 29 Indian states, including Chhattisgarh, Gujarat, Maharashtra, Odisha and Madhya Pradesh.