An Indian Parsi ties sacred thread around his waist before entering a fire temple during Navroze, the Parsi New Year, in Secunderabad in August 2017. Parsis, followers of Zoroastrianism, were exiled from Iran in the seventh century during religious persecution by Muslims. (Photo: AFP)

The US government’s ambassador-at-large for international religious freedom has warned that some governments in Asia are stepping up religious persecution under the cover of the Covid-19 pandemic.

“It’s a tough situation for a lot of religious minorities in various places around the world,” Samuel Brownback told a May 14 media phone briefing.

He listed five ways that religious minorities are having problems.

The first is simply religious repression, while the second involves government repression that also affects religious minorities, such as when they are denied healthcare.

The third involves religious minorities being scapegoated with fake news accusing them of spreading the pandemic.

The fourth is online inflammatory speech, where actors are putting out disinformation campaigns that are targeting religious minority groups.

The final category is misuse of technology to repress, discriminate or surveil what is really outside the scope of the crisis.

He added: “It is also a matter that a number of members of the International Religious Freedom Alliance, other countries, took it up, and we saw countries — Iran, Burma [Myanmar], Cuba, Russia — release religious prisoners, prisoners of conscience, and others. So thank you for doing that. I think some people’s lives were possibly saved by this.” 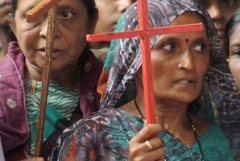