US condemnation of IS genocide came too late, bishop says 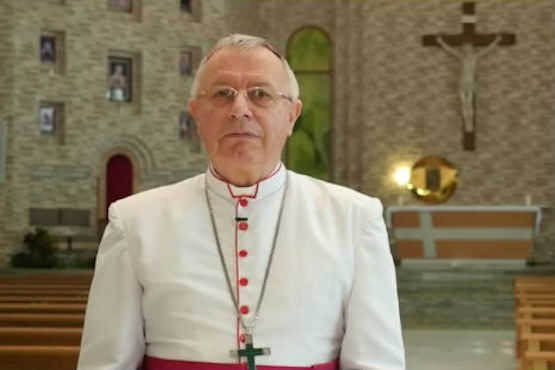 Belated U.S. condemnation of anti-Christian violence 'will probably do more harm than good,' he says. (Photo courtesy of the Apostolic Vicariate for Southern Arabia)

The spiritual head of a tiny Catholic flock living in the southernmost part of the Arabian Peninsula says the United States was too late in condemning the so-called Islamic State (IS) for committing genocide against Christians and other minorities.

"The West is of course entitled to take a stand but it should have been made far earlier," said Bishop Paul Hinder, head of the Apostolic Vicariate for Southern Arabia, which includes Oman, Yemen and United Arab Emirates.

The Swiss-born Capuchin bishop fears that the U.S. condemnation of IS, which Secretary of State John Kerry did not make until March 17, could actually be counterproductive at this point.

"I doubt whether such declarations will help much at the moment. It will probably do more harm than good to those who are in [IS'] hands," he said recently in an interview with church papers in Western Austria.

He said a more hopeful sign was Pope Francis' invitation in February to the grand imam of Al-Azhar, the prestigious Islamic University in Cairo, to come meet him at the Vatican.

Bishop Hinder called the proposed meeting, which has yet to take place, a sign that a common way of reacting to terror organizations like the IS was being sought. And he also expressed hope that Islamic scholars would ask themselves the fundamental question as to whether the Quran or Islamic tradition could be interpreted in the way the IS was interpreting them today.

"It is quite clear that this will take time," the bishop said.

"It took us a long time, too, to declare religious liberty. At the moment, however, this is a matter of the greatest urgency," he said.

Bishop Hinder, who will soon be 74, has been leading the vicariate in Southern Arabia for the past 12 years — first as an auxiliary bishop and, since 2011, as its head. He said the situation for Christians in the region differed widely.

For example, he said life for Christians in Yemen was now "truly terrible." Only one priest has remained in the country since the March 4 massacre at an old people's home in Aden. Sixteen people were killed, including four Missionaries of Charity nuns.

The whereabouts of the only other priest, Father Tom Uzhunnalil, were still unknown. The Indian-born Salesian was kidnapped during the massacre and, although there had been rumors that he was to be crucified on Good Friday, the bishop said he had no confirmation that this was true. He said he thought and hoped the priest was still alive.

Bishop Hinder said he had no doubt that the March 4 massacre was specifically aimed at Christians.

"The old people's home was for elderly Muslims and, although some of the patients and 11 of the Muslims employees were killed, clearly the fact that it was run by Christian nuns greatly aggravated the radical Muslim group responsible for the massacre," he said.

Now with only one priest left in Yemen, liturgical life for Catholics there has more or less come to a standstill.

In 2013 there were still thought to be between 15,000-25,000 nonnative Christians living in the country — mostly refugees from Somalia, Eritrea and Ethiopia. There were also some 2,500 indigenous Yemenite Christians. But the majority of these believers have since emigrated.

"Besides the few nonnative Christians, there are still a small number of indigenous Christians. I know almost all of them personally — one will soon be able to count them on one hand," Bishop Hinder lamented.

He said the decline over the years has also come through Christians marrying Muslims and having to promise to raise their children in the Islamic faith.

The bishop noted that in other places in the region, such as Saudi Arabia, Christianity is tolerated only as long as it remains strictly behind closed doors.

"If anyone feels in the slightest way disturbed by us when we gather for services and decides to call the police, then we Christians have a problem," he said.

"So we have a rule: No singing and no microphones. But that is, of course, an intolerable restriction of freedom of worship," he said. In Saudi Arabia (which is part of a neighboring apostolic vicariate) there is no such concept as religious freedom since people do not have the right to choose their religion, he said.

But he noted that the situation in the United Arab Emirates is different. He recounted how the authorities in Abu Dhabi, where he is based, helped him rescue the only Missionary of Charity nun who survived the March 4 massacre in Yemen and get her out of the country.

He said Christians are publicly recognized in Abu Dhabi and he is even often invited to lunch by influential sheikhs.

As a sign of this openness some 20 Masses in various languages were celebrated in his cathedral on Easter Sunday for the thousands of Catholics there, mostly foreign immigrants.

Bishop Hinder said genuine efforts were being made in the Emirates to treat everyone justly regardless of their religion. He said the situation in Oman was similar except that there are fewer Christians there.