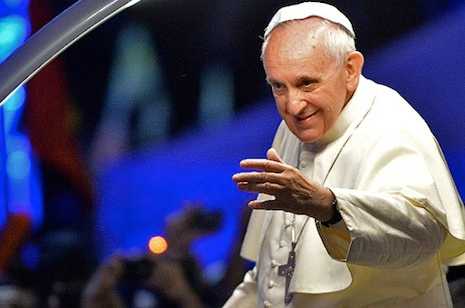 American Catholics overwhelmingly support newly installed Pope Francis, according to a poll released Friday, and agree with his statements that the church should focus less on contentious social issues.

Nearly seven in 10 American Catholics say the church has become too focused on same-sex marriage, abortion, and contraceptives, according to a Quinnipiac University national poll released Friday.

This number is consistent with other polls, like a Public Religion Research Institute poll in 2012 that found 59% of American Catholics support same-sex marriage.

Despite the support among American Catholics, the Roman Catholic Church maintains rigorous opposition to same-sex marriage. But in a recent wide-ranging interview with America Magazine, the pope brushed off critics who have said he should be more vocal in trumpeting the church's position on abortion and same-sex marriage.

In the interview, Francis said if the church fails to find a "new balance" between its spiritual and political missions, its moral foundation will "fall like a house of cards."

“We cannot insist only on issues related to abortion, gay marriage and the use of contraceptive methods," he told his Jesuit interviewer. "I have not spoken much about these things, and I was reprimanded for that."

But the pope said the church's teachings on those issues are clear, and he clearly believes in those teachings, so what else is there to say?

"It is not necessary to talk about these issues all the time," Francis said.