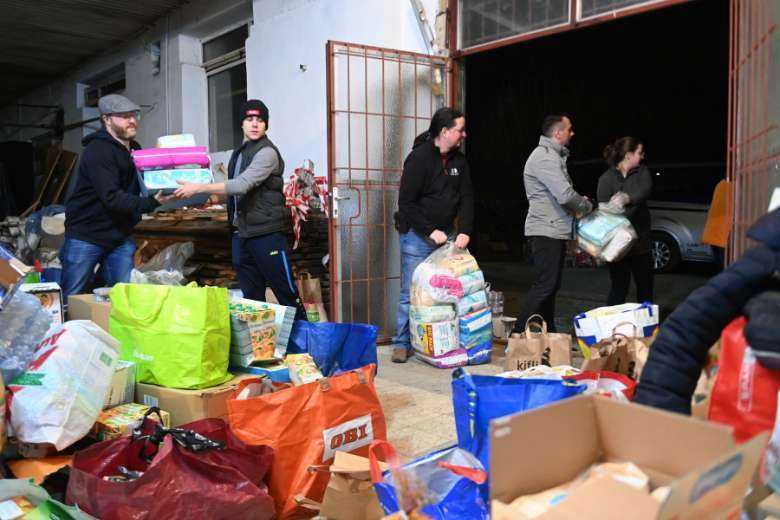 Volunteers receive donations at a temporary refugee base near a crossing point on the Hungarian-Ukrainian border on Feb. 27. (Photo: AFP)

Through an art project and a dress-down day, students of St. Sebastian Catholic Academy in Woodside, the United States, sent prayers and support to refugee families in Ukraine and in neighboring Poland.

"We were doing 'mite box Mondays' for the month of March, supporting the missions like we always do," said principal Michelle Picarello, referring to the school's ongoing collection of financial donations to help the Missionary Childhood Association, a pontifical mission society.

"When we heard we would be able to send money specifically for Ukraine, we dedicated March 21 to collect for that," she said. The school sent the parents of the 390 students a request for a minimum donation of $1 per student and ended up collecting $1,165.

At the same time, art teacher Sandy Ryan was also working with students on drawings that would include prayers for the children and families of Ukraine.

Deacon Lou Panico, the Missionary Childhood Association coordinator in Brooklyn Diocese, said diocesan Catholic schools were notified that they could help Ukraine through a special solidarity fund set up by the National Office of the Pontifical Mission Societies which included on its online donation site, MISSIO.org.

This fund is to support outreach of the church in Ukraine and in Poland, as well as efforts of missionaries in Poland to welcome and care for refugee families. To date, 11 Brooklyn schools have contributed more than $17,000 to this fund.

St. Joseph the Worker Catholic Academy in Brooklyn sent $3,000 — their proceeds from a dress-down day where students pay to dress out of uniform.

For these students, prayer was also part of the picture. "It started with prayer, blue and yellow prayer chains all over the building, calling to mind the colors of the Ukrainian flag, reminding all to pray for those suffering," said principal Stephanie-Ann Germann.

The donation of $4,377 from St. Bernadette Catholic Academy in Brooklyn is the largest donation to the fund so far.

Father Charles Keeney, diocesan director of the Pontifical Mission Societies in Brooklyn, visited that school in early April and said the war in Ukraine has deeply affected young people, particularly as they see what is happening to children and mothers.

He told them about the image of empty strollers at a train station in Poland, waiting for families who fled with only the basics. "Young people here -- always mission-minded -- wanted to do something to make a difference," he said.

"I heard the stories about children my age being dropped off and parents going to fight in the war," said Leana Longhitano, a seventh grader at St. Sebastian's, explaining why she wanted to help.

"My message to young people in Ukraine would be that we have you in our prayers and we are supporting you," she said.