Vials with Covid-19 vaccine stickers and syringes with the logo of US pharmaceutical company Johnson & Johnson. (Photo: AFP)

Use of the Johnson & Johnson COVID-19 vaccine, approved Feb. 27 by the U.S. Food and Drug Administration, raises moral concerns because it was "was developed, tested and is produced with abortion-derived cell lines," the chairmen of two U.S. bishops' committees said March 2.

The bishops concluded, however, that "while we should continue to insist that pharmaceutical companies stop using abortion-derived cell lines, given the world-wide suffering that this pandemic is causing, we affirm again that being vaccinated can be an act of charity that serves the common good."

In December, the prelates addressed concerns over what then were the newly approved BioNTech and Moderna vaccines because "an abortion-derived cell line was used for testing them," but "not used in their production."

However, the Johnson & Johnson Janssen one-shot COVID-19 vaccine raises "additional moral concerns" because it was "developed, tested and is produced with abortion-derived cell lines," Bishop Rhoades and Archbishop Naumann said.

In their December statement, the bishops noted that cell lines used were derived from fetuses aborted in the 1970s.

In their March 2 statement, the bishops quoted the Vatican's Congregation for the Doctrine of the Faith, which judged that "when ethically irreproachable COVID-19 vaccines are not available ... it is morally acceptable to receive COVID-19 vaccines that have used cell lines from aborted fetuses in their research and production process."

"However, if one can choose among equally safe and effective COVID-19 vaccines," the bishops added, "the vaccine with the least connection to abortion-derived cell lines should be chosen. Therefore, if one has the ability to choose a vaccine, Pfizer or Moderna's vaccines should be chosen over Johnson & Johnson's."

Doses of this newest vaccine -- now the third approved for use in the United States, were being shipped to distribution points around the country March 2.

On March 1, a number of dioceses, including the New Orleans Archdiocese, Diocese of Baton Rouge, Louisiana, and the Diocese of Burlington, Vermont, issued their own statements warning about the moral concern over the Johnson & Johnson vaccine. 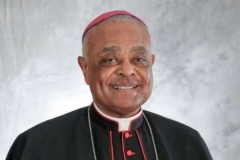 Cardinal prays on CNN program marking 500,000 Covid-19 deaths in US

Bishop Rhoades and Archbishop Naumann reiterated in their latest statement what they stated in December: that getting a COVID-19 vaccine is an important act for the common good amid this pandemic.

The Vatican COVID-19 Commission and the Pontifical Academy for Life have said, "We believe that all clinically recommended vaccinations can be used with a clear conscience and that the use of such vaccines does not signify some sort of cooperation with voluntary abortion."