US Archbishop criticizes Biden, hopes for change from courts 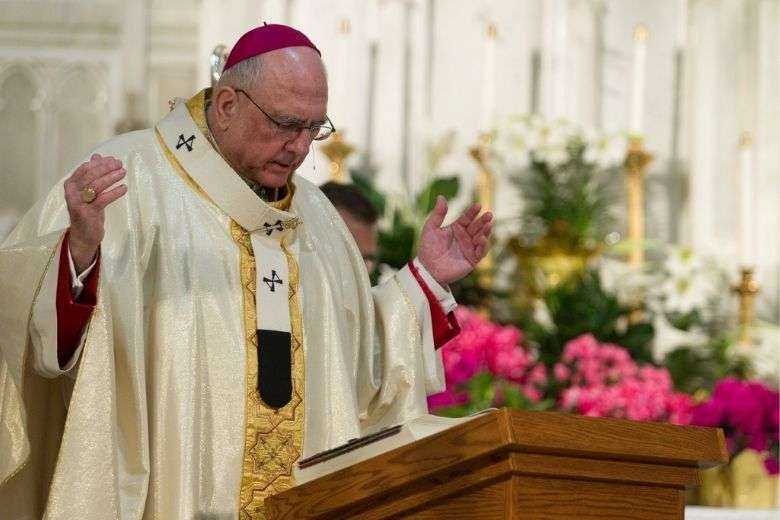 The head of the U.S. bishops' Committee on Pro-Life Activities called President Joe Biden's stance on abortion "religiously and ethically incoherent" during his homily at the opening Mass of the annual National Prayer Vigil for Life Jan. 28.

Biden "proudly professes to be a devout Catholic even as he promises to codify Roe v. Wade, seeks to force American taxpayers to fund abortions ... and desires to force the Little Sisters of the Poor to provide contraceptives and abortifacients in their employee health plans," said Archbishop Joseph F. Naumann of Kansas City, Kansas.

"Sadly, President Biden is the perfect example of the religiously and ethically incoherent straddle: claiming to believe that human life begins at conception and personally opposing abortion, while doing everything within his power to promote and institutionalize abortion not only in the U.S.A. but also around the world."

He added, "The people of the United States have entrusted enormous power and responsibility to President Biden. However, the presidency does not empower him to define Catholic doctrine and moral teaching."

Archbishop Naumann made his remarks in a startlingly empty Basilica of the National Shrine of the Immaculate Conception in Washington as coronavirus restrictions capped the number of those in attendance at 250.

What's more, March for Life organizers, because of the pandemic and security issues arising from the rioting at the Capitol three weeks earlier, decided on an all-virtual march, except for a small contingent of pro-life leaders making speeches on the National Mall, followed by a walk up to the U.S. Supreme Court Jan. 29.

Archbishop Naumann called the seating of Amy Coney Barrett on the Supreme Court "one of the unanticipated blessings of the past year."

"The makeup of the court has vastly improved in the last four years," he added. "There is legitimate hope that the U.S. Supreme Court could modify or even reverse the decisions that we commemorate each year," a reference to the Roe v. Wade and Doe v. Bolton decisions in 1973 that legalized abortion throughout the country.

As Barrett noted during her confirmation hearings, Archbishop Naumann said, "the Roe and Doe decisions are far from having the features of settled law as evidenced by the many statutes passed in state legislatures annually testing and challenging the assumptions of Roe and Doe."

He offered a refutation of the notion held by some Christians that the Bible is "silent on the morality of abortion."

"What these Christians ignore is how frequently the Scriptures speak about the wonder, awe and beauty of life in the womb. The Bible speaks of children as a blessing. In fact, fruitfulness is recognized as a great gift from God," Archbishop Naumann said.

He cited passages from the Scripture readings used at the Mass: Isaiah's declaration that "for now the Lord has spoken who formed me as his servant from the womb"; the psalmist's proclamation that "truly you have formed my inmost being; you knit me in my mother's womb"; and Luke's Gospel account of Mary meeting her kinswoman Elizabeth, who tells the Blessed Mother, "For at the moment the sound of your greeting reached my ears, the infant of my womb leaped for joy."

Gloria Purvis, fired less than a month before from her morning radio show hosting job by EWTN, proclaimed the New Testament reading and read the prayers of the faithful. EWTN was one of the many television outlets showing the Mass live; a livestream also was carried on the website of the U.S. Conference of Catholic bishops.

The number of those watching the Mass on the basilica's YouTube channel topped out at 1,189 at the end of Archbishop Naumann's homily -- a far cry from the 10,000-plus who would ordinarily cram into the nation's largest Catholic church for the vigil's opening Mass. But by 8 the following morning, YouTube had recorded 9,540 views.

District of Columbia restrictions for attendance at religious services call for a maximum of 25% of capacity or a limit of 250, whichever number is smaller.

The Archdiocese of Washington sued the city Dec. 11 over what was then a cap of 50 on attendance. Five days later, Mayor Muriel Bowser, in response to the suit, increased the limit to 250 and by Dec. 22, city and archdiocesan officials announced the suit was settled.

The entrance procession alone at past vigil Masses would itself feature more than 250 bishops, priests, deacons and seminarians and last 30 minutes; this year, there was just Archbishop Nauman and three altar servers.

The concelebrants -- Archbishop Christophe Pierre, apostolic nuncio to the United States, Archbishop Timothy P. Broglio of the Archdiocese for the Military Services, and Auxiliary Bishop Joseph L. Coffey of the military archdiocese -- did not take part in the procession.

The sight of empty pews and plenty of elbow room on the video feed of the Mass was highly unusual. Msgr. Walter Rossi, the basilica rector, had to remind the assembly to wear their masks over both their nose and their mouth, and to not leave their pew for Communion until told to do so by an usher. Archbishop Naumann thanked basilica staff for their efforts "in these unusual circumstances."

The usual overnight activities at the Basilica -- which in years past have had thousands of young people packed into the church's lower level for hourly Holy Hours and around-the-clock confessions, and perhaps a bit of sleep -- were either canceled or done online.

The Mass program also included the dates for next year's premarch vigil: Jan. 20, starting with Mass at 5:30 p.m., and ending Jan. 21 with a Mass at 7:30 a.m. The start times reflect the hope that the crowds typical at the basilica would be able to return.