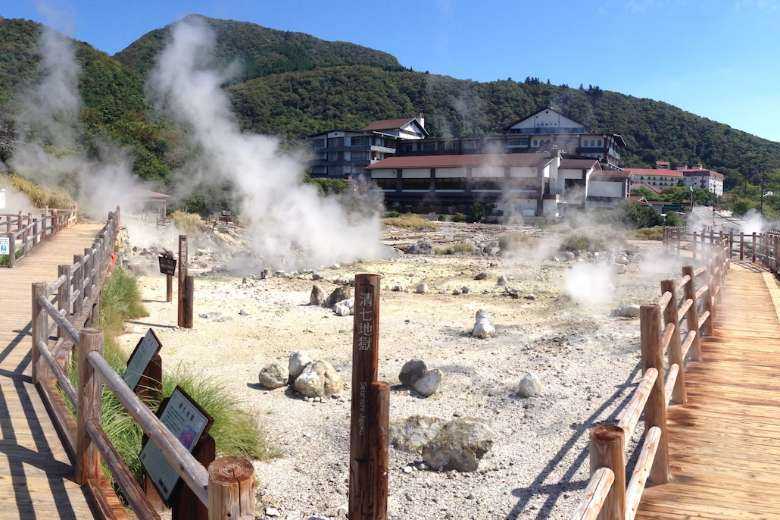 Steam comes out of the boiling springs of Unzen, a mountain village in Japan famous for its thermal baths but less well known as a place where Christians were tortured and killed in the 17th century. (Photo supplied)

The journey through Nagasaki Prefecture starts from a small town with a curious name, Obama, which has no relation with the former US president (but did make it globally notorious for a while) and only means a small beach.

It is in fact a small spa resort on Kyushu, Japan's third-largest island, overlooking the open ocean. From here you get on a bus that climbs the sharp curves of the mountains up to a height of 700 meters. Then you finally reach Unzen, a mountain village that sprang around its famous thermal baths, the hottest in all of Japan, they say here, with temperatures reaching 120 degrees.

At some point in the 17th century, it was the site of Christian persecution when the rulers immersed Christians in the boiling waters to force them to renounce their faith.

Touristically speaking, it is the perfect venue for all those looking for a memorable snapshot to hang in that space of fleeting self-gratification on the various social networks.

From the earth rise, for 20 or 30 meters, large fumes that surround a hotel whose foundations dig right into the boiling thermal waters. One wonders what technical tricks the engineers have put in place to keep those gigantic structures, some centuries-old, standing on that incandescent quagmire.

The gargling of the continuous bubbling of water, stones and mud evokes ghosts of otherworldly landscapes. It is no coincidence that the place is known as "Unzen Hell."

The place became a popular resort back in 701 when the Shingon Buddhist sect built a temple here. Even today the place is sown with small statues (Jizo), carved in stone, which in Japan are often found on the border between physical and spiritual places, between earthly life and beyond.

But this place hides a dark side, a side that most of the tourists that come here for the spa most likely ignore. Actually, even the signs responsible for bearing the historical information of the place only hint at the “mystery” in two laconic lines: instead they prefer to indulge in the details of the local flora and fauna.

It was around the year 1620 that the local government thought of using the hot thermal waters of Unzen to force Japanese Christians to renounce their faith.

Between 1627 and 1633, during the Christian persecution that lasted over two centuries, about 30 people were killed here because of their particular faith and over 60 were brutally tortured. It is not difficult to imagine the excruciating sufferings of those early believers, also because the visit to the thermal baths allows you to walk right above the waters that are the very places of the torture.

If the wind blows in the wrong direction, you find yourself immersed in a bath of sulfurous vapor which for a few moments blurs your eyes and stuns your sense of smell.

When the writer Endo Shusaku, famous for writing the popular novel Silence, visited this place and tried to imagine his personal reaction to that type of torture, he said that he would probably lose consciousness at the very thought of being thrown into the water.

And this is perhaps the reason why many Christians brought here were spared that inhuman fate. It is likely that they first fainted from the unbearable pain of the burns and were immediately pulled out of the scorching heat. But they didn’t end up surviving either as they were “ended” elsewhere by other — and maybe not less painful — means.

At the time, the Japanese had conjured up more effective ways to prolong the agony: the famous practice of the "pit" provided that the person was hung upside down and left swinging for hours in the bottom of a well full of excrement.

Making the long journey on foot, only with great difficulty is it possible to retrace the monument's built-in memory of the victims of the persecution.

It is so well hidden that one must have luck or certain stubbornness in the exploration to detect its presence. A few years ago an English writer who came to write about the place despite all his efforts could not locate it. It is understandable given that it is located beyond thick vegetation and completely lacking in directions to reach it.

Stuck in the ground are a one-and-a-half-meter marble cross and a plaque, all strictly in Japanese. In front, there is a small wooden bench. The presence of the bench is reassuring and arouses an even stronger emotional impact than that of the monument itself. It suggests that perhaps someone is still tempted to stop here and spend some time to say a prayer for those many forgotten martyrs.