Two of the Chinese government's prelates allegedly have girlfriends and children 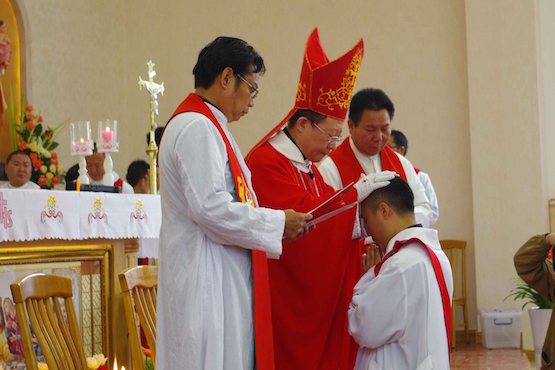 Ma Yinglin, a government-appointed bishop and president of the government-sanctioned bishops' conference, ordains a new priest on May 24. A news report on China-Vatican negotiations said Ma is one of the four bishops to be recognized by Pope Francis. (Photo supplied)

Hopes are high at the Vatican for a historic deal with Beijing on the appointment of bishops but a raft of obstacles including clergy with conjugal partners and children, alleged sexual misconduct and excessive support for the ruling Communist Party remain.

There are added problems of growing fissures in the underground church with followers concerned about a deal between the Holy See and the Communist Party that regularly institutes programs of repression. There has also been the emergence of at least two underground bishops 'ordained' without the approval of either the Vatican or the Chinese government.

The two sides are set to resume discussions in Rome later this week but recent news reports that a "final push" to conclude the deal is imminent have been hosed down by sources close to both the Holy See and in China.

Though Pope Francis said on Oct. 2 that negotiations will go slowly, a split has already been seen before a deal took place with recent secret ordinations of at least two underground bishops without Vatican approval in September.

The issue between the Vatican and Beijing is the status of eight bishops appointed by the government run Chinese Patriotic Association. China is demanding the Vatican pardon all the eight bishops who were ordained with only government-appointment, and to give them authority to rule a diocese.

Of the eight, reports said that four are ready to be approved by the Vatican: Ma Yinglin of Kunming, Guo Jincai of Chengde, Yue Fusheng of Harbin and Tu Shihua of Puqi.

The others are problematic lead by, Lei Shiyin, excommunicated bishop of Leshan, and Liu Xinhong, bishop of Anhui, who allegedly have girlfriends and children.

Another obstacle is bishop candidate Father Lei Jiapei of Xichang who was elected in 2010 and rumored to be ordained in late November. The Holy See has not approved his case but appointed him as apostolic administrator in 2015. Rumors alleged that the unpopular candidate has a "sexual misconduct" issue that has lead to the Vatican withholding his candidature.

"The whole diocese and the government also know it is a difficult problem to solve as there is more and more opposition against him," said a source in Xichang.

Father Lei was also infamous among Catholics across China for his sacrilegious act after a video showed him, wearing his vestments, singing Communist songs on stage in 2011. Father Lei Jiapei of Xichang (middle in the front row) wearing his vestment, while singing Communist songs on stage in 2011. The video went viral on the internet, his actions angering Chinese Catholics. (Photo supplied)

The remaining two: Zhan Xilu, bishop of Mindong, and Huang Bingzhang, excommunicated bishop of Shantou, are the heads of dioceses where there is already a Vatican-approved bishop.

"Granting pardon is only forgiving the sin that these bishops committed for receiving ordination without papal approval. It does not mean recognizing them as bishops," a researcher in Beijing who asked not to be named told ucanews.com.

"Even if the pope eventually recognized those four bishops, it does not mean they have the authority to manage a diocese. There were a number of cases like this in the past and this is supposed to be settled in the negotiations," said the researcher.

A Vatican source said that a media report quoting three people familiar with negotiations saying that the talks about the appointment of new bishops were focused on Chengdu and Changzhi Dioceses was wrong.

In fact, both parties have approved the two candidates. Bishop-designate Joseph Tang Yuange of Chengdu's approval came in October 2015, shortly after a six-member Vatican delegation visited Beijing; and Bishop-designate Peter Ding Lingbin of Changzhi also received papal approval prior to his election in December 2013.

"Instead of announcing the negotiation result jointly, the leaks tried to present things as final. That would make both sides, or at least one side, unhappy," the researcher told ucanews.com.

On Oct. 21 a Chinese government spokeswoman simply reiterated the wish to improve constructive dialogue but online news and comments aggregator Guancha carried a provocative commentary asking if the underground church felt painful because the Vatican was now set to recognize four government-appointed bishops.

Yuan Quan, a columnist of Guancha, said the recognition will be a "great leap forward" on the issue of bishops' appointment and "particularly meaningful for normalization" as the four bishops are all staunch supporters of the independent church principle.

Three of them are vice chairs of the Chinese Catholic Patriotic Association (CPA) and the 97-year-old Bishop Tu is a theorist with profound knowledge of an independent church principle, he noted.

Pope Benedict XVI's pastoral letter to Chinese Catholics in 2007 stated that the CPA is incompatible with church doctrine. The organization advocates a principle of church independence of any foreign influence and it is accused of controlling the church for the government.

An underground Catholic told ucanews.com they just don't know what to do as they fear the government-backed bishop in their diocese now with dual approval from the government and the Vatican would retaliate against them.