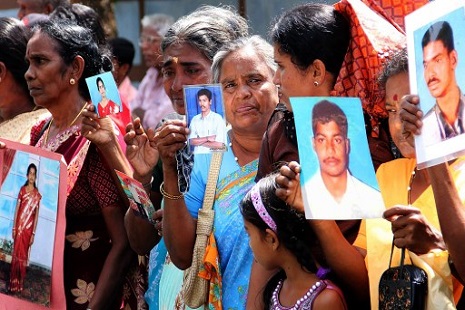 Tamil media reported that Pillay’s schedule was changed by the Sri Lankan government at the last minute to avoid a protest at Jaffna library, a symbolic site for the northern Tamil minority after it ws burned to the ground by majority Sinhalese in 1981.

The UN’s most senior rights official met with 15 Tamils who presented their disappearance cases for 15 minutes each at the UN office in Jaffna.

“We called on the commissioner to find our loved ones. She promised to take action and deliver justice for us,” said Anandi Shashidaran who was holding a picture of her husband who went missing during the last year of the war in 2009.

The UN has estimated that 40,000 civilians died in the bloody final stages of the Sri Lankan conflict in which the military squeezed the rebel Tamil Tigers into an ever smaller corner of the north of the country, trapping fleeing civilians in areas of heavy fighting.

The UN Human Rights Council is due to discuss Sri Lanka at its next sitting in October, having passed two resolutions calling for greater accountability for the atrocities of the war.

A comprehensive report is expected to be tabled at a subsequent session of the council in March.

“We hope that substantive progress on human rights protection will be made,” said Dr Paikiasothy Sarawanamuththu, executive director of the Colombo-based Center for Policy Alternatives, who met with Pillay yesterday.

The high commissioner’s week-long trip has sparked controversy both inside and outside the country. The fighting is over, but animosity lingers on

Pro-government media have been accused of running a vilification campaign against Pillay, considered unprecedented in recent UN history, amid accusations that she is biased against the government of President Mahinda Rajapaksa whom she is scheduled to meet later this week.

Pillay has said that she is in Sri Lanka to raise human rights issues and not to criticize, although her visit has already faced opposition.

About 100 pro-government supporters including Buddhist monks protested against her in Colombo yesterday.