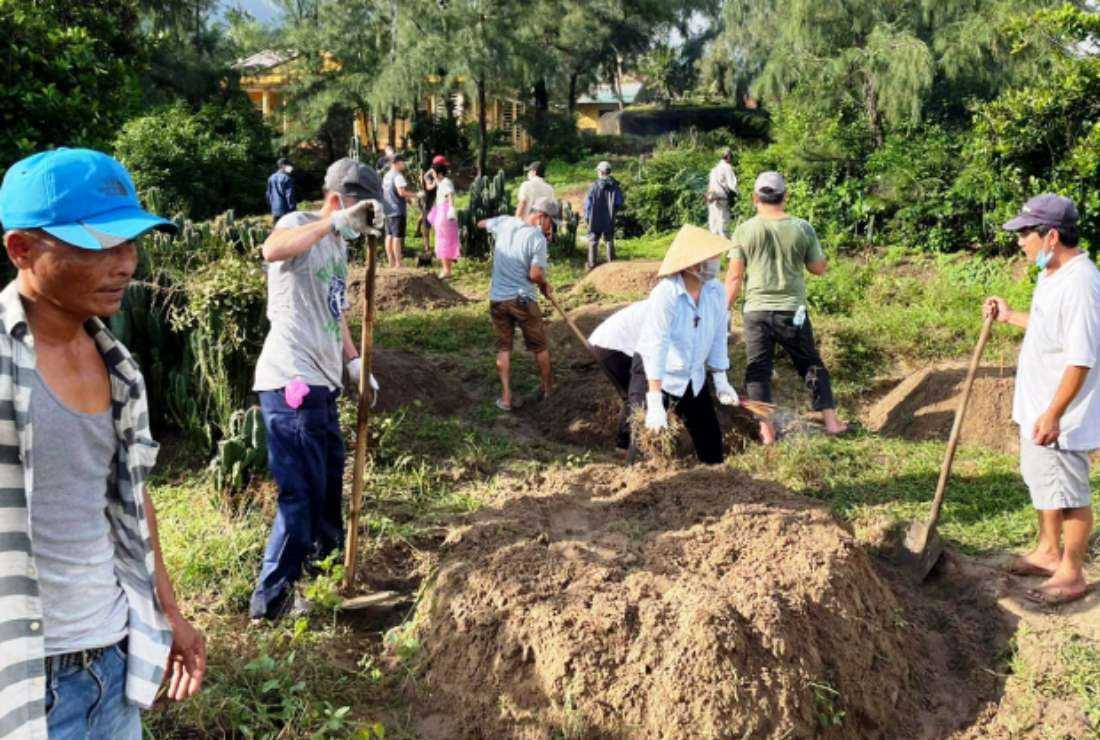 They put incense on graves and prayed for their ancestors at the Catholic cemetery based in Huong Tra town of Thua Thien Hue province.

One of them, Tran Huu Khang said he visited the grave of his maternal grandfather Mattheus Ngo Van Thong.

“We visit and pray for our ancestors at the cemetery in November as a way to show our solidarity with our Catholic relatives and heal the deep divisions among us for nearly two centuries,” Khang said, adding that his ancestors from Hai Duong village joined Catholicism in 1841.

The 53-year-old farmer said Catholics were not allowed to bury the dead in the two village cemeteries so they had to set up a graveyard for themselves.

Villagers visit the graves of their ancestors and hold death anniversary ceremonies at the communal house on the 25th day of the 12th lunar month while Catholics gather to pray for their ancestors at their homes on the first Sunday of November.

He said the sharp divisions were not bridged until recent years when local Catholics started to invite Buddhist and Confucian villagers to attend their wedding parties and death anniversaries. They also take an active part in village festivals and offer money to maintain village cemeteries.

“As a result, local Buddhists and Confucians highly appreciate the filial affection of Catholics and willingly attend their funerals and weddings,” Khang said.

The followers of other faiths also allow their children to convert to Catholicism and marry Catholics.

The father of three, whose eldest son and two grandchildren are Catholic, said Catholics revere their ancestors and give loving care to their family members, which is similar to Confucianism.

Upholding the tradition of ancestral worship

Father Paul Nguyen Huu Hung, the pastor of Thanh Cong Parish with 200 members, said Vietnamese people traditionally perform filial duties to their ancestors by holding ceremonies to mark their death anniversaries and looking after their graves. They also revere and look after their living parents.

Father Hung said local Catholics undertake the reconstruction of old graves to remember their ancestors and show their affection and gratitude to neighbors.

Last year they rebuilt 20 graves in the parish’s graveyard and 30 others at the two village cemeteries. Those old graves without names are of those who died in wars before 1975.

This month the parish plans to rebuild 35 other graves of fetuses that were miscarried or died after birth. Their relatives buried them in the buffer at the Hai Duong Subparish's graveyard, which was damaged by floods last month.

“Now both sides willingly work together to foster good relationships with one another by visiting the families of the dead and helping hold funerals and carry coffins to cemeteries,” he said.

The priest said during November local Catholics attend daily Masses, visit cemeteries praying for their ancestors, and do charitable work as a way to keep alive their faith tradition and continue their ancestors’ good work.

They have ancestral altars in their homes so that they can commemorate them on the Tet, or Lunar New Year, festival, death anniversary ceremonies, and weddings.

“I have a moral duty to express my deep gratitude to local Catholics because they helped me,” he said.

The father of three said his 600-square-meter garden used to belong to a Catholic couple who had no children and died in 1980. The government granted it to him after he finished his military service in 1992.

Thang said he is still indebted to the archbishop of Hue who called on local people to save rice and offer it to people in need regardless of their backgrounds in 1980 when local people suffered from the government’s centralized economic mechanism and the US trade embargo.

“Real gratitude to the dead and ancestors is a mandatory duty of the living and a solid foundation for all family and social relationships,” he said.