About 50 percent of complaints related to such sales are related to the church, says Japanese lawyers' group 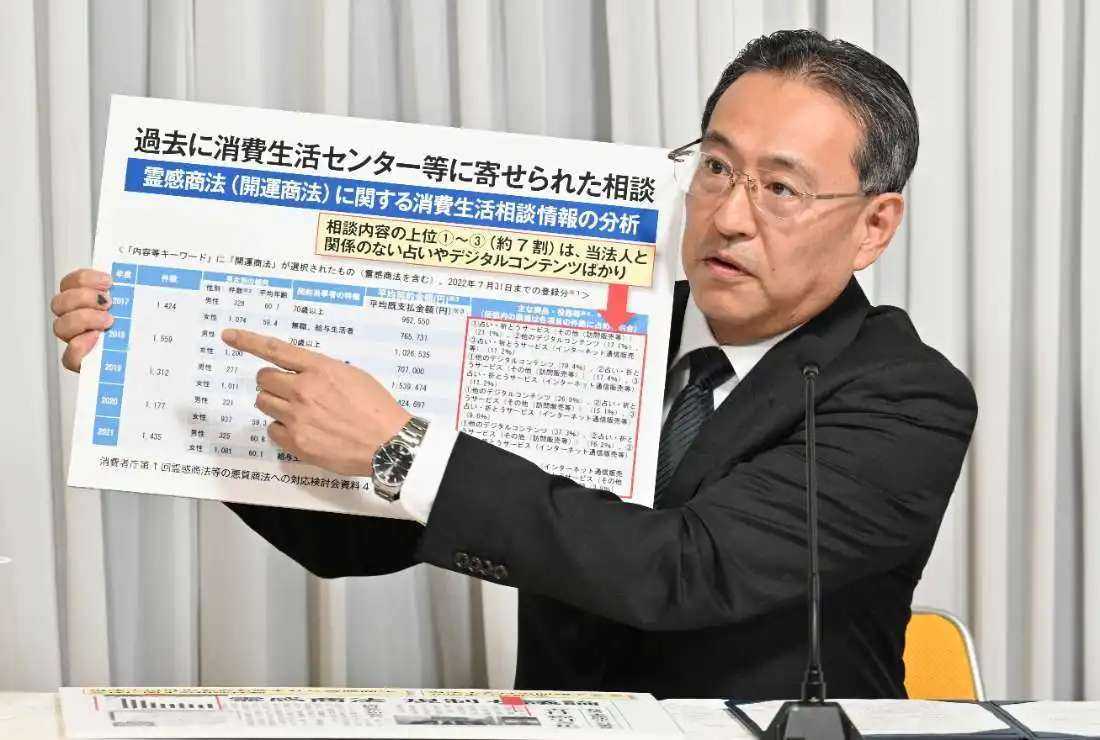 Hideyuki Teshigawara, general manager of reform promotion headquarters of the Japan branch of the Family Federation for World Peace and Unification (FFWPU), widely known as the Unification Church, answers questions during a press conference at the FFWPU Tokyo headquarters on Sept. 22, 2022. (Photo: AFP)

The controversial Unification Church has siphoned millions from its followers through so-called “spiritual sales” over the years, claims the top lawyers’ association in Japan.

During a news conference on Nov. 30, the Tokyo-based Japan Federation of Bar Associations (JFBA) said that about 50 percent of complaints over “spiritual sales” are related to the Unification Church, the Asahi Shimbun newspaper reported.

These sales are ones by which religious organizations sell goods or services at exorbitant prices promising supernatural benefits such as preventing bad luck or soothing the souls of deceased loved ones.

As of Oct. 24, the church has been complicit in 309 of a total of 624 spiritual sales cases, JFBA officials said, adding that the complainants have lost more than 10 million yen (US$72,000) to the Unification Church.

The revelation comes as South Korea-based the Family Federation for World Peace and Unification, popularly known as the Unification Church faces intense scrutiny and criticism following the assassination of former Japanese PM Shinzo Abe in July.

The suspected assassin, Tetsuya Yamagami, reportedly admitted to having a grudge against Abe for his alleged support for the church that is accused of ruining the suspect’s family after his mother donated about US$1 million to the church.

Since Abe's assassination, a number of Japanese politicians, including those from the ruling Liberal Democratic Party, have come under fire for their alleged ties to the Unification Church.

"We could not repay the debt, so we had to sell our house and land"

The lawyers’ association said the church used its “reikan shoho,” or spiritual sales, to lure victims into donating huge sums of money to the church.

Among the complainants, 101 victims, or 33 percent claimed damages from the church worth between 1 to 10 million yen, the lawyers’ group said.

Some, 83 victims claimed they are still paying the church and another 74 stated they stopped payments more than two decades ago.

During the press conference, the lawyers released the statements of victims who claimed they faced various forms of extortion and difficulties due to the Unification Church.

“I was taken to a public notary office by a religious group follower and was made to draw up a document stating, ‘I donated the money of my own free will,’” said one victim whose mother is a follower of the church.

"Church officials said they have started an investigation into financial anomalies"

Some victims also revealed cases of domestic abuse that they faced after consenting to marry in joint wedding ceremonies organized by the Unification Church.

“I married a Korean man at a joint wedding ceremony. I lived in South Korea, but my husband was extremely violent, and I returned to Japan two years later.”

“I tried to bring my child home with me, but he took my child away from me,” quoted the officials.

Unification Church executive Hideyuki Teshigawara said the church would now "take into consideration the financial situation of followers and ensure that donations are not excessive.”

In September, Japan's National Network of Lawyers Against Spiritual Sales said that it has filed suits seeking 123.7 billion yen ($850 million) in damages for former followers since 1987.

The church, however, says just four civil lawsuits were filed since 2009 and they have all been settled, for a total of 38 million yen.

Experts say Japan serves as a financial hub for the Unification Church which was founded by Sun Myung Moon in Korea in 1954.