Unification Church in Japan to reform after criticism

The group says it took measures to regulate donations in 2009, but will now bolster them 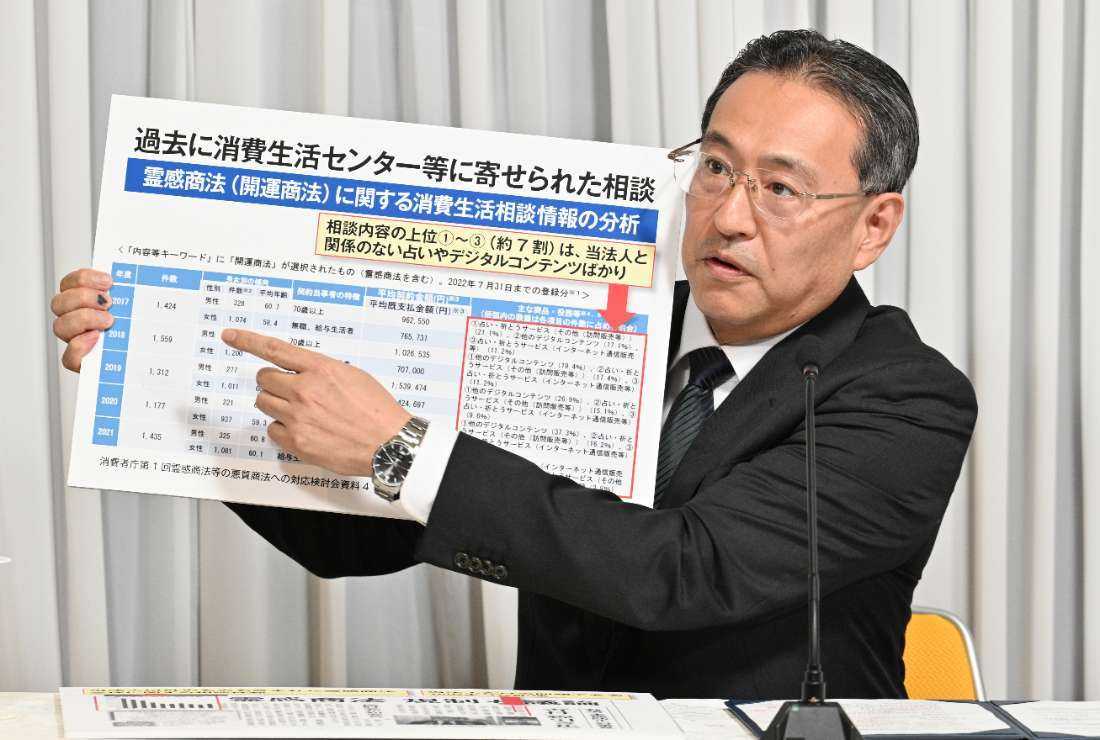 Hideyuki Teshigawara, general manager of reform promotion headquarters of the Japan branch of the Family Federation for World Peace and Unification (FFWPU), widely known as the Unification Church, answers questions during a press conference at the FFWPU Tokyo headquarters on September 22, 2022. (Photo: Kazuhiro Nogi / AFP)

The Unification Church in Japan pledged Thursday to prevent followers from making "excessive" donations, after criticism of its practices following the assassination of former prime minister Shinzo Abe.

Abe's alleged assassin is believed to have resented the sect over massive donations his mother made to the church, leaving his family bankrupt.

He reportedly targeted Abe believing he was linked to the church, whose followers are sometimes known colloquially as "Moonies".

The group has denied any wrongdoing and disavowed Abe's murder, but church executive Hideyuki Teshigawara said it would now "take into consideration the financial situation of followers and ensure that donations are not excessive".

The church will "respect the independence and free will of followers" on donations, Teshigawara, who heads the group's new reform committee, told reporters.

The group says it took measures to regulate donations in 2009, but will now bolster them.

The announcement comes after a wave of accusations about the church's practices, including from former members who say they were pressured into making enormous donations under the guise of "spiritual sales".

The mother of the man accused of killing Abe donated around 100 million yen (then around $1 million) to the church, according to a relative.

Japan's National Network of Lawyers Against Spiritual Sales says it has filed suits seeking 123.7 billion yen ($850 million) in damages for former followers since 1987.

The church, however, says just four civil lawsuits were filed since 2009 and they have all been settled, for a total of 38 million yen.

Experts say Japan serves as a financial hub for the church, which is known officially as the Family Federation for World Peace and Unification and was founded by Sun Myung Moon in Korea in 1954.

Japanese believers are taught that they need to atone for their country's wartime occupation of Korea, in part through hefty donations, according to former members and experts.

Teshigawara said the church would review the use of money raised in Japan for missionary work overseas and would look to use the funds to support domestic efforts instead.

Anyone found violating the church's policies would be "strictly punished", he added.

The reforms are unlikely to dissipate the widening controversy over the church, particularly after the revelation that it had links with around half the ruling party's lawmakers.

Prime Minister Fumio Kishida, who has seen his government's approval ratings slip over the issue, has pledged his party will cut ties with the church.

He faces additional controversy over a planned state funeral for Abe on September 27, with polls showing more than half of Japanese people oppose the event.