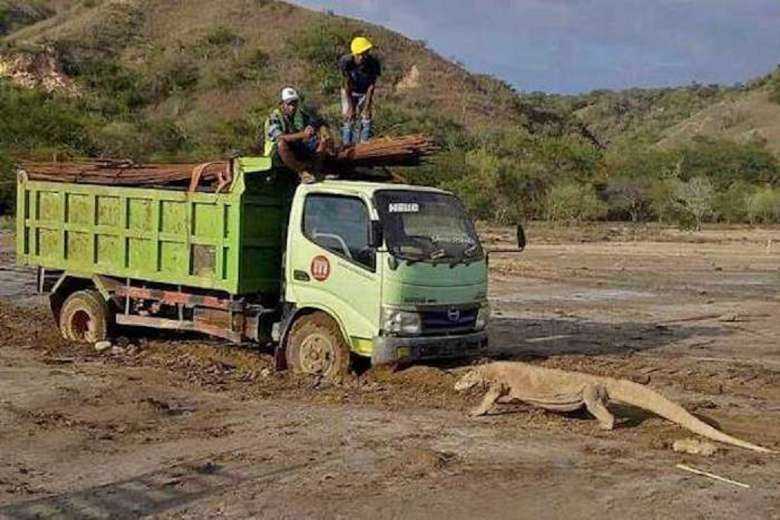 A Komodo dragon stands in front of a truck carrying materials for the construction of a tourist park dubbed 'Jurassic Park' on Rinca island in this October 2020 file photo. The photo sparked protests against the park project by environmentalists. (Photo supplied)

The call came in a letter at the end of the 44th session of UNESCO’s World Heritage Committee (WHC) from July 16-31.

“The Indonesian government needs to temporarily halt tourism infrastructure projects in the protected Komodo habitat, which is considered to have outstanding universal value,” the WHC said.

It called on the Indonesian government to submit a revised environmental impact assessment that will be reviewed by the International Union for Conservation of Nature.

Indonesia is building tourist facilities dubbed “Jurassic Park” on Rinca island, one of the last remaining habitats of the endangered Komodo dragon.

There are estimated to be about 3,000 Komodo dragons in the national park, according to government figures.

Last year a picture showing a Komodo dragon coming face to face with a truck triggered protests against the plan to attract high-end tourists.

“It’s a win against the destruction of a conservation area and World Heritage Site by the current regime’s tourism development,” news portal Tempo quoted him as saying on Aug. 1.

He said the Indonesian government should no longer find itself at loggerheads with East Nusa Tenggara residents and international civil society groups as President Joko Widodo now faces resistance from the international community and organizations.

“Infrastructure construction in Komodo National Park can be categorized as an activity which has the potential to change local natural conditions and wreak environmental destruction,” Father Jenarut told UCA News.

The Komodo park isn't an ordinary area but a special place and a safe haven for the dragons, he said.

Responding to UNESCO, a spokesman for Coordinating Maritime Affairs and Investment Minister Jodi Mahardi said the appeal is based on reports of a third party.

"Currently, the government will focus on increasing local people's welfare and maintaining the environment," he said.

Tourism and Creative Economy Minister Sandiaga Uno defended the projects, saying the government would prioritize the ecosystem of the Komodo dragons.

“The goal is a Komodo National Park that is managed with utmost care without harming biodiversity and ecosystems there,” he told an online press conference on Aug. 2.