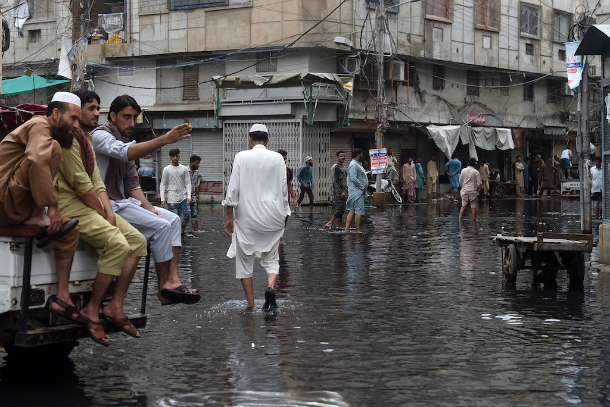 Men wade along a flooded street after heavy monsoon rain in Pakistan's port city of Karachi on Aug. 31. Christians have been badly hit by the country's coronavirus lockdown. (Photo: AFP)

Seventy percent of Christians, particularly daily-wagers and laborers, lost their jobs or reported reduced income during Pakistan’s nationwide lockdown, a study has found.

“Around 25 percent are on the verge of losing their jobs, 60-70 percent saw a drop in monthly income, 80 percent of businesses closed or collapsed in Christian communities during the lockdown and 60 percent have reported exhausting their savings. The income of churches has dipped by up to 80 percent,” states the report titled "Impacts of Covid-19 on the Livelihoods of Christians in Pakistan."

Pakistan Partnership Initiative (PPI), a Christian organization based in Islamabad, recently launched the study based on interviews with church-based organizations, community members, pastors and relief beneficiaries in 10 districts across the country.

It noted that the funding of faith-based organizations (FBOs) has also declined and their resources have been cut due to strict government regulations and the reduced flow of funds from the international community.

“The obtaining of no-objection certificates from the Economic Affairs Division, a requirement set by the government to receive foreign funding as well as to undertake operations in any part of the country, is a lengthy, unclear and time-consuming process hindering the capacity of FBOs and churches to support our communities,” the report said.

“The pressure on churches has increased as vulnerable segments of society look towards them for help. Slowing economic growth and cuts to development budgets mean more squeezed economic and employment opportunities for Christians. Churches are not ready and trained to respond to such emergencies. Moreover, around 80 percent of pastors are also vulnerable to this situation.

“Some 35 percent of Christian community members are literate. Education and health are primary areas of FBO programming in the current situation and for the next 12-18 months. There have been requests for training programs on new ways of working, which include fundamental crises/emergency programming, emergency preparedness and online business and livelihood.”

There are an estimated 10,000 churches and 300 Christian organizations in Pakistan.

Churches were shut down on March 15 even before Prime Minister Imran Khan declared a national lockdown amid the coronavirus pandemic that has infected 295,636 with 6,288 deaths. These included 77-year-old Sister Ruth Lewis, head of Darul Sukoon home for underprivileged persons with disabilities, who died from Covid-19 in a Karachi hospital in July.

According to Ashraf J.W. Mall, chief executive of PPI, more than half of Pakistan’s Christian community are dependent on Muslims for their livelihood.

“Both have been badly affected due to the lockdown. Literate community members who lost their income requested digital learning for online business as an alternative. Many requested support. Those who sold their livestock and assets requested a cash grant. Community members are falling victim to loans at high interest rates,” he said.

“Churches have requested bailout packages to sustain their work for some time. Pastors should also be trained to extend their services to counsel people and the subject of emergency should be introduced in the syllabus of seminaries.”

Human rights groups say religious minorities were not being given state food supplies in the Islamic republic where 60 percent of Christians live below the poverty line. Christians account for 1.6 percent of the population.

Charity group Saylani Welfari has faced accusations that non-Muslim families have been excluded from its door-to door distributions. In April, more than 100 Christian families from Punjab's Kasur district were reportedly excluded from food aid distributed by a village committee comprising Muslims. In another incident, Christians were denied food on April 2 in a village near Lahore.

The same month, the National Commission for Justice and Peace and Minority Rights Group International launched the online Stigma Survey in Pakistan. Rising inflation has added to the burden of middle-class non-Muslims.

Church of Pakistan Bishop Humphrey Sarfaraz Peters of Peshawar said he appreciated PPI for bringing the Church and organizations together for a joint national level response for a greater impact.

“While Covid-19 has brought despair, it has also brought hope to work together and overcome this crisis. A joint and well-planned effort will be required on the part of all stakeholders to restore people’s lives and plan their response,” he said.

Federal Minister for Religious Affairs Noor-ul-Haq Qadri joined Bishop Peters in launching the study at a hotel. In his address to diplomats and minority leaders, Qadri said he appreciated the Church’s role during the pandemic.

“Prime Minister Imran Khan refers to social uplifting of minorities at every meeting of the cabinet. Ehsaas emergency cash program helped all citizens without any discrimination. Mobilization within minority communities could have benefited more with government aid,” he said.

Rubina Feroze Bhatti, a provincial member of the government-run National Commission on the Rights of Children, also welcomed the timely research.

“It will help restrategize things in the new context of Covid. PPI deserves credit for forming a strong network of FBOs and provide a valuable service. Organized and concerted efforts are now needed to coordinate and build liaisons with the government. The Church can play a more effective role by working with such lay groups,” she said.