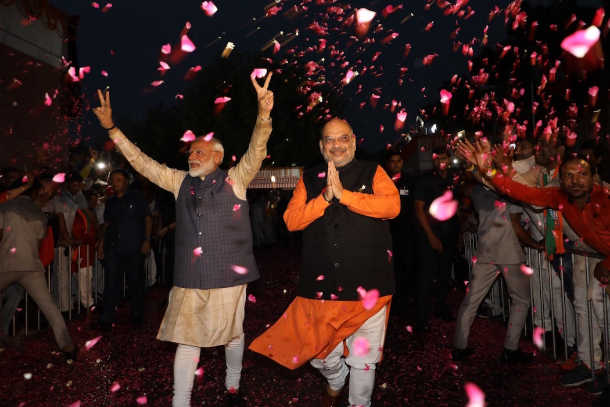 Photo shared by the Bharatiya Janata Party (BJP) on Twitter showing Prime Minister Narendra Modi (left) and party president Amit Shah being showered with flower petals by supporters as they celebrate a landslide May 23 election victory.

Indian Prime Minister Narendra Modi and his Bharatiya Janata Party (BJP) swept to power for a second five-year term on May 23 in an election fought largely on the plank of Hindu nationalism.

The BJP and its allies won 351 seats, reducing Congress and the parties that support it to just 92 seats in the 545-seat national parliament.

Independent parties won 99 seats. The remaining two seats are reserved for Anglo-Indian representatives who are nominated by the government.

The BJP alliance improved on its 2014 election total of 336 seats.

"India wins again," Modi declared during a victory speech at the party's headquarters in the capital, New Delhi, in which he pledged to build "a new India" featuring growth and prosperity for all.

Despite the landslide, the BJP failed to make any significant political gains in the nation's southern states.

It was unable to win any of the 45 seats in Kerala and Andhra Pradesh states and could win only one seat in Tamil Nadu.

Observers noted that in the seven-phase election process during April and May much of the electioneering focused on Hindu nationalist sentiments rather than issues such as unemployment, inflation and a worsening agrarian crisis.

The campaigns, particularly of Modi and other BJP leaders, were filled with notions of Hindu supremacy and "Pakistan bashing," said Sourabh Sharma, a political columnist based in New Delhi.

A terrorist attack on India and the manner in which the government tackled it early in the election year helped BJP project Modi's leadership as the best to counter arch-rival Pakistan and Islamic extremism, Sharma said.

In early February, a suicide bomb attack killed 40 army men at Pulwama, in  the southern part of Kashmir. The attack was carried out by Pakistan based militant outfit Jaesh-e-Mohammad. The Modi government responded with air strikes on Pakistan in which reportedly 300 Islamist militants were killed. Pakistan responded by bombing Indian territory.

"This is the clarion call," Sharma told ucanews.com.

Many fear that the big majority for the Hindu stalwart party poses a threat to India's secularism and multi-culturalism.

An editorial in Britain's The Guardian newspaper described it as "bad for India’s soul".

"The world does not need another national populist leader who pursues a pro-business agenda while trading in fake news and treating minorities as second class citizens," the newspaper stated.

In 2014, BJP came to power promising to create 20 million jobs annually and to make Indian cities "smart" with electric buses and green environs.

It also promised subsidies to farmers and to revitalize the sagging economy. But five years later the promises remain largely unfulfilled.

Religious minorities such as Christians and Muslims accused the first-term BJP government of tacitly promoting bigoted attacks on non-Hindus as part of a bid to make India a "Hindus-only" nation.

A.C Michael, Development Director at the Alliance Defending Freedom (ADF), said a second term for Modi would not deter Christians from practicing their faith as guaranteed by the Constitution.

However, Christians would continue to be falsely viewed as being pre-occupied with trying to secure mass conversions to their faith, despite census figure showing that the Christian proportion of the population had remained stagnant since independence in 1947.

"We may also face attacks," he said. "But that does not mean we will stop practicing our faith."

Allen Brooks, a spokesman for the Assam Christian Forum in the north-eastern state, told ucanews.com that the BJP's victory should not be perceived as a threat to minority communities.

Rather, he argued, minorities should "stand united" to protect their interests as constitutionally equal citizens.

Hindus comprise 966 million, or some 80 percent, of India's 1.2 billion people and 172 million Muslims make up 14 percent. There are 28 million Christians. Other religions include Baha'i, Buddhism, Sikhism, Jainism and the Parsee faith.