Even though different sexual orientations are mentioned in ancient epics, present day Hinduism does not have a clear view 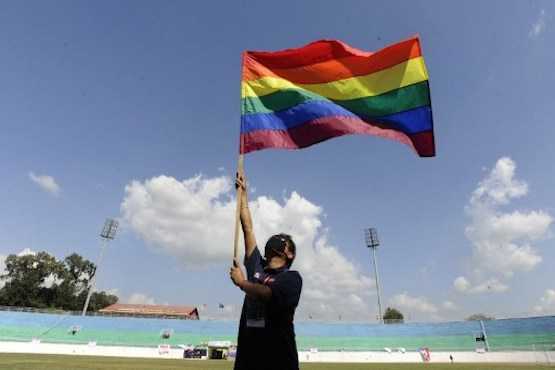 A participant holds a rainbow flag during the opening ceremony of the first South Asia Lesbian, Gay, Bisexual and Transgender Sports Festival in Kathmandu in this file photo. (Photo by AFP)

The profile of Lesbian, Gay, Bisexual and Transsexual (LGBT) people in Nepal is low. For many it has connotations of something unnatural, a negative influence of modernization or a cultural malpractice.

However, Nepal ranks amongst the most progressive nations regarding LGBT rights. But what happens to the traditional meaning of marriage with recognition of same sex unions?

In Nepal, LGBT advocacy has been well resourced by international funding agencies. In 2007, Nepal legalised same sex relations and the government began looking into legalizing such marriages.

Moreover, in 2015 Nepal approved a new constitution that guaranteed citizens the right to all kinds of gender. Article 12 provides the right for people to have their preferred gender on their identity cards. Some of Nepal's offices have already issued citizenship certificates and passports with a "Gender O" option (for "other").

But yet, official recognition of the third gender requires medical proof, their participation in the government services and bodies limited with LGBT people facing much discrimination and abuse.

Nepal is a majority Hindu nation. Even though different sexual orientations are mentioned in the ancient epics, present day Hinduism and its practices do not have a clear view on LGBT issues.

In Nepal, religion is sacred and Hindu gods and goddess are depicted erotically on temple walls. The phallic symbol of Shiva is worshiped by Hindu men and women with equal devotion. And depictions of kama or sexual union are painted and carved in ways that a Nepalese wouldn't normally see or speak about in the presence of a family member.

Despite a supportive legal system and liberal religious points of view, Nepalese society is still culturally very conservative, especially when it comes to sexuality. Social mores and tradition see only two genders and sex as something between a man and woman.

Introducing other expressions of sexuality may seem unusual and a bad influence of westernization or modernization. Self-identification with homosexuality is not easy due to family pressures and social shame. This can lead to forced marriages with the opposite sex.

Sex education is not openly in use. Even educated people hesitate to speak about sex. In such a situation, talking about same sex relations is not an option.

Progressive legal support towards LGBT people can spark controversy in the general public. Nepalese society is yet to learn about and be open to different sexual orientations.

My concern is for those LGBT people who have to hide their real identity and are forced into unwanted relationships with a person of the opposite sex and not in love with. This could be more difficult for women.

Our society taught us that a family begins with a sacred marriage between a man and woman, which is open to life and having children. Hence same sex marriage in the name of equality rights may not acquire the same level of social acceptance — even though there are some trends of same sex couples adopting children.

Does it mean we should change the definition of marriage?

A few months back I attended a forum about "Christ and Law." There was a discussion between theologians, legal scholars and human rights activists about traditional marriage and same sex marriage.

This led to the reflection that if our legal system permits or at least doesn't interfere with same sex marriage, should we not then redefine the meaning of marriage?

Marriage is not only a binding of two souls but also a relationship between two families. Laws from the national legislature and advocacy by LGBT groups will not guarantee social respect and family acceptance for all kinds of relationships.

I think it is not the nation-state but the general public that needs to be more aware about LGBT issues and their desire for cultural, religious and social acceptance.

One thing's for sure, we cannot deny the existence of LGBT people. Maybe that is why Pope Francis said, "Who am I do judge?" while answering a question on same sex relations. Such neutrality may not have met the expectation of many LGBT Catholics but at the same time it asks us to contemplate "who are we to judge?" This might minimize discriminatory attitudes towards our brothers and sisters.

For many, it may not be possible to understand the deep psychosocial difficulties that LGBT people have endured through their life time. But one thing's for certain, they too are human beings made in the image of God, and God is same for all people, regardless of gender and sexual orientation.