Underground churches in China dig in despite harassment 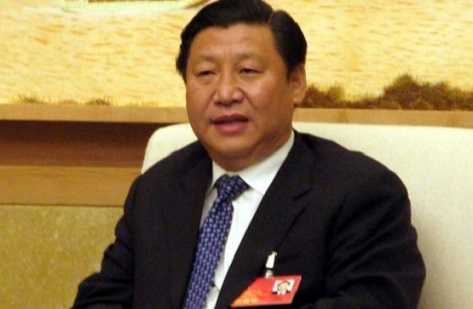 Moves against underground churches are a part of a broader crackdown on dissent since the regime of leader Xi Jinping, pictured, came to power in late 2012 (Photo by VOA)

While Shouwang has been a target of the government for many years, the latest move against underground churches is part of a broader crackdown on dissent since the regime of leader Xi Jinping came to power in late 2012. The new government is targeting any organization perceived as a threat to Chinese Communist Party policy.

"There are thousands of family churches in Beijing, with congregations ranging from several members to thousands," said Xu Yonghai, a Christian activist in Beijing.

Shouwang is one of the city's largest and most prominent unregistered or "family" churches -- generally small groups of worshippers who gather in private to hold services. There are "official churches" -- Catholic and Protestant -- that operate under the auspices of the government but the numbers of people in underground churches are believed to be far greater.

Weeks before Christmas in 2009, the Shouwang Church was abruptly kicked out of their long-time home in a nondescript low-rise building after their landlord succumbed to pressure from authorities. More than 500 Church members then gathered outside the east gate of Haidian Park.

Beijing is a city of environmental extremes, in winter the mercury can drop to -4 degrees Fahrenheit, in summer it soars to 104 amid stifling humidity. That morning in 2009 icy winds had dumped the earliest and heaviest snowfalls since records began in 1949.

Since the eviction, the Shouwang Church has regularly posted open letters on chinaaid.org -- a US-based aid organization for Chinese Christians -- announcing the number of outdoor services they have held and objecting to the treatment meted out by local authorities, the latest on March 27.

In an Aug 13 letter published online, the Shouwang Church said that during a religious service held two days earlier at least 38 members were arrested, with nearly two-thirds of the group held for an indeterminate amount of time.

"It was really sad for us to hear that one sister was manhandled by a deputy [police] director ... who seized her by the throat and pulled her hair. Our sister calmly faced such rough treatment, and forgave this man by God's grace," the letter read.

Denied the necessary permits to rent or build a church Shouwang has continued its outdoor worship. The Church has held close to 200 outdoor services, come rain, hale or shine. Despite restrictions on their outdoor activities they have resolutely continued to gather.

In the capital particularly, underground church members are often agitators for political change in China. More recently reports have emerged that members of a number of these communities have recently been harassed and members detained.

"My family church never had members arrested for 25 years, but it happened under the new regime," Xu said. "We had most of our members, 17 out of 20, arrested and detained for up to one month in January."

It's not just underground churches but members of state sanctioned churches that are now being targeted by the government.

In Nanle County, Henan province, Pastor Zhang Shaojie of the state-approved Three Self Patriotic Movement was arrested on Nov 16 on a charge of "gathering a crowd to disrupt public order”. Beijing lawyer and civil activist Xu Zhiyong was recently convicted on the same charge and sentenced to four years in prison.

Zhang's trial was suspended indefinitely on April 16. The court detained Zhang's lawyers Zhao Yonglin and Liu Weiguo who claimed certain statements deposed to the court were inadmissible as they may have been obtained by coercion or torture. The lawyers asked that the witnesses be called to confirm their accounts. A press release from the pastor's family claimed the court had threatened to suspend their licenses to practice. Zhang dismissed his attorneys, believing it was in their best interests.

In Zhejiang province the stand-off between the Sanjiang Church and local authorities, as reported by ucanews.com on April 7 continues. A letter authored by "Christians in Wenzhou", a city in the province, denounced the government's plans to demolish a church the congregation had just completed building, originally with the authorities approval.

"The brothers and sisters of this church and brothers and sisters from various places in Wenzhou, who have come to support it, have been singing, praying and gathering in its holy hall for nearly a month. Among them, many take turns to watch and pray twenty-four hours a day," the letter read.

Xu said that while the government crackdown and harassment continues, in the end faith will prevail.

"Religion is spreading rapidly in China. People need beliefs and the official ideology has become bankrupt, even [Communist Party] members themselves do not believe in Communism," Xu said.