Underground bishop harassed up until his April 2 death 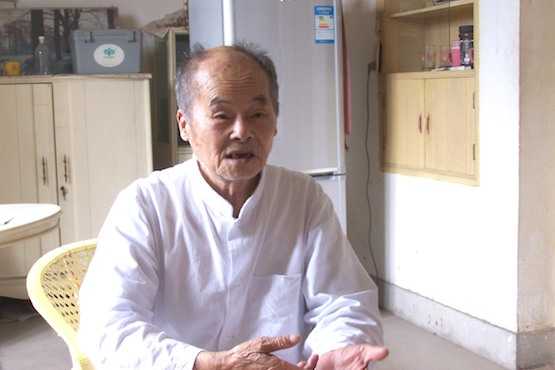 Underground Chinese Bishop Thomas Zeng Jingmu told ucanews.com in 2008 that he saw little hope for improved Vatican-Beijing ties. He died April 2 at the age of 96. (Photo by ucanews.com)

Underground Bishop Thomas Zeng Jingmu of Yujiang in central China was harassed by Chinese authorities right up until his April 2 death.

The 96-year-old bishop had been hospitalized since suffering a head injury from a fall on Holy Saturday March 26.

Although the retired bishop was not considered to be as influential as other underground Chinese bishops, state authorities maintained surveillance on him, even as he lay dying in the hospital, said a source who asked not to be named.

Government officials allowed Catholics four days of mourning, rather than the customary seven for an elderly person. "They also only allow us to place a zucchetto, but not the mitre — a sign of authority — on the bishop's head," the source said.

"The authority threatened that if we insisted (on placing a mitre), they would cremate the bishop's body immediately," he said, adding that cremation is an unusual practice in Jiangxi province, home to about 100,000 Catholics.

A local source told ucanews.com that about 5,000 mourners attended the funeral, surrounded by 1,000 officials with the state security apparatus who monitored the ceremony.

In 2008, Bishop Zeng told ucanews.com that "the Catholic Church and the Communist Party have no room for compromise."

"I think there is no hope for China and the Vatican to build ties," he said, referring to a 1958 Communist Party booklet that read "the Vatican is the fatal enemy of the Chinese people."

Born in 1920, Bishop Zeng was ordained a priest in March 1949 before the Communist takeover in October. He refused to join the Chinese Catholic Patriotic Association, which led to his repeated arrests and subsequent imprisonment for 30 years.

During the Cultural Revolution (1966-76), he discovered three times that someone attempted to poison him as the color of his rice looked different and smelled strange. "I just pushed the problematic rice aside with my chopsticks and continued to eat," he recalled.

He was secretly consecrated as bishop of Yujiang in 1990 and joined the Dominican Order in 2000. He was succeeded by Bishop John Peng Weizhao in 2014.