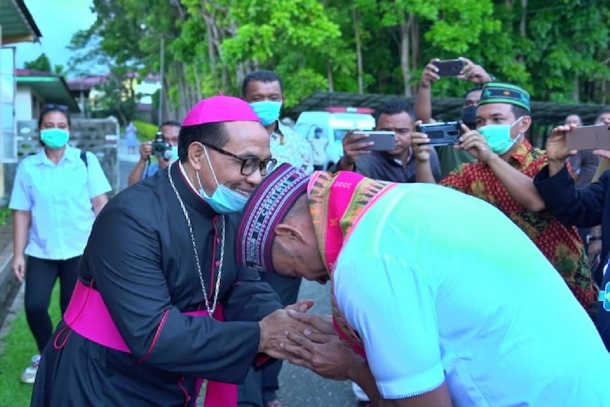 The governor of Indonesia’s East Nusa Tenggara province, Victor Bungtilu Laiskodat, has appealed for support from the Catholic Church to help push through government development programs and resolve any disputes resulting from them.

His appeal comes in response to church opposition, particularly in Ruteng Diocese, against a proposed limestone quarry and cement factory in the diocese and against mining activities in general.

During a meeting with Bishop Siprianus Hormat of Ruteng on June 23, he said he was “being forced to limp” without the support of the Church.

“If a bishop’s stance is different from that of the governor, it tears the governor's ligaments, making him unable to walk,” Laiskodat said. “It’s like a sprinter who initially runs fast but suddenly ends up walking with a stick.”

During the meeting, he stressed his desire to promote development in the province in areas such as agriculture, fisheries, livestock and tourism.

Predominantly Christian East Nusa Tenggara has a population of 5.5 million people, of whom 54 percent are Catholics and 39 percent Protestants.

The Protestant governor called the Catholic Church a pioneer of development in the province, citing the role of missionaries who assisted in the construction of much of the province’s infrastructure.

However, the governor could not sway Bishop Hormat on the issue of the limestone quarry.

The bishop recently visited Catholics in Lengko Lolok and Luwuk — two villages where a quarry and cement factory are to be located.

Laiskodat reportedly granted permits for the projects to two firms that are in the process of relocating the villagers.

Bishop Hormat told Laiskodat that despite the province being rich in natural resources, including minerals for mining, “geographical, ecological, social and cultural factors are not conducive for mining.”

“On that basis, we reject such activities and encourage economic development in other sectors,” he said. “We expect a model of development that is truly ecologically oriented and supports the integrity of creation."

The governor's visit to the area was also met by protests from activists and students, including the Catholic Students' Association of the Republic of Indonesia.

Hendrikus Mandela, chairman of the association’s Ruteng chapter, called on the governor not to offer empty promises and to revoke the quarry and factory permits.

"His appeal for church support will be meaningful if he cancels such permits, which are clearly opposed by the Church," he told UCA News.

Flory Santosa Nggagur, a Catholic layman, said the governor has to stick to his election promise to focus on sustainable development. “Mining is contrary to that, so he must cancel the permits,” he said.