A woman holds a baby in the village of Pangatloan, which will be affected by the building of a dam. (Photo by Sharlene Festin)

A waxing moon floated in the night sky, giving light to a small group of people huddled outside a hut in a hamlet somewhere in the hinterlands of Luzon Island in the Philippines.

There was excited talk between sips of coffee. A baby was about to be born and the comadrona, or midwife, had just arrived.The sleepy hamlet of Pangotlaon is one of several small settlements that make up the village of Magsaysay in the town of Nakar in Quezon province.
Donate to UCA News with a small contribution of your choice
Bounded on one side by the Sierra Madre Mountains and on the other by the Kaliwa River, Pangotlaon is home to about 200 farming families.Many are settlers from nearby areas who have for years tried their luck in the mountains."We’re all excited about the baby," said Jobellie Ramon. She said the couple had been waiting for a child for years.The birth, however, seemed to be ill timed. What with all the talk about the building of a dam near their homes that could result in their displacement.The dam people were referring to is the Kaliwa Dam, part of a government project that aims to fill the water needs of Manila’s 12.8 million residents.The proposal to build the dam started in 2012 but was only approved in 2014. In 2018, the Philippine government signed a loan agreement and a commercial contract with China for its construction.
Related News 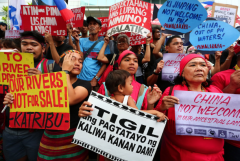 Thank you. You are now signed up to Daily newsletter
The Kaliwa Dam project is among 75 flagship infrastructure projects being pushed by President Rodrigo Duterte’s administration.From the beginning, the project has been mired in controversy. Bishop Bernardino Cortez of Infanta has warned that the dam will result in problems in the area.He said it is a "sword hanging over the head" of people living downstream in the Kaliwa River.

Catholic Church leaders have expressed opposition to the proposed project.

The bishops have urged the government to instead look for alternative sources of water for Manila and launch a massive information drive for its residents to learn water management.Financial experts have also expressed doubts over the seemingly usurious rates of the China loan.They warned that the Philippines might be caught in what is now being dubbed as China’s debt trap diplomacy. Certain provisions of the loan agreement have also been questioned, including a section that states that the Philippine government "irrevocably waives any immunity on the grounds of sovereignty."The agreement also provides that whatever disputes arise from the contract shall be heard in Hong Kong under Chinese laws. A dam is soon to rise along the Kaliwa River in the hinterlands of the Philippines' main island of Luzon, threatening to displace tribal people and settlers alike. (Photo by Sharlene Festin)

Environmental activists have also expressed concern over the potential damage the building of the dam will inflict on forests and a thriving ecosystem.

The area is home to wildlife, including the Northern Philippine Hawk Eagle, the Philippine Brown Deer and the Philippine Warty Pig.Environment group the Haribon Foundation reported that 12,147 hectares of residual forests has 172 plant and flora species, some of which are endemic and are threatened.Questions have also been raised with regard to the scrapping of alternative solutions to the looming water crisis in the Philippine capital.Tribal people living along the river have also expressed their opposition to the dam, saying it will destroy their villages and flood their ancestral lands.To appease people's fears of displacement, the government has offered relocation sites to the Dumagat tribal people and promised livelihoods for those who accept the offer.But Josie Conchada, a Dumagat in Pangotlaon, said she and her family are not leaving."What are we going to do [in the relocation site]? What will we live on? We are farmers, we till the land and live off the forest," she said."If they put us in the middle of nowhere, how will we survive? Worse, if they put us close to urban centers, we will die off like flies," Conchada said.She said moving people off their land "will erase our culture and way of life.""They can offer us this and that, but I’m not taking it," she said.For the settlers, however, no offer has been made.Nilo Sarte, a 68-year-old migrant from the Bicol region in the southern tip of Luzon, said he has no idea about the government's plan.Sarte came to Pangatloan with his parents when he was just a boy. He said he is worried that time is running out for them as rumors are rife that construction of the dam will begin in a few months."There are many settlers in the area and it doesn’t look like government agencies have us on their list of people to relocate," he told ucanews.com."When the time comes for us to leave, where will we go? What will happen to us?" said Sarte.Inside the hut, the hushed voices of the women signaled that the baby was about to be born.Jobellie got up from the wooden stool where she was perched outside the hut and took a quick peak inside."That baby is going to be born soon," she said. "I wonder where that child will be a year from now."