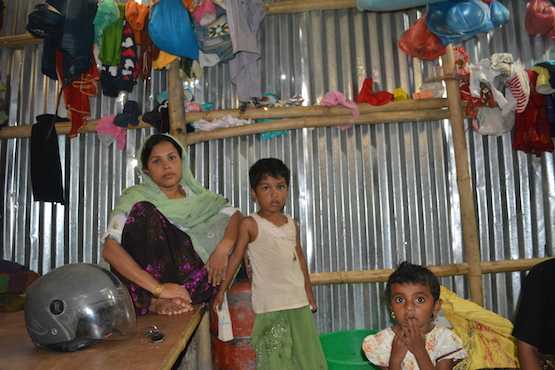 Majhida Begum's family living in makeshift shelter within a Rohingya community in Kapan, in this file photo. (Photo by Pragati Shahi)

On a sunny morning in early September, Majhida Begum's family of five is getting ready to have lunch inside a makeshift shelter in Kapan, on the outskirts of Nepal's capital, Kathmandu.

Kapan is a residential area and tourist hub with several monasteries.

Twenty-seven-year-old Begum, her husband and youngest son sit in a cramped dwelling made from zinc sheets and bamboo.

While some rice is ready, buffalo meat is still cooking.

"This is our first proper lunch since we arrived here a week ago," Begum says through an interpreter.

The family are Rohingya Muslims from Myanmar who fled after the latest round of communal bloodshed erupted in late August.

By some estimates, nearly 430,000 Rohingya, mostly women, children and elderly people, have fled to Bangladesh from Myanmar's strife-torn Rakhine State.

Begum, her husband Yusuf and their three children came to Nepal with another Rohingya family; that of Sofia Khatun, husband Abol Hussein and their three-year-old daughter.

"Children were playing outside when we heard loud gun shot sounds," Begum says.

"The police came and started burning homes and my husband, who was out working at a fish farm, rushed back home.

"We left immediately, escaped to nearby jungle and walked to reach another village where we stayed for two days."

Begum's family crossed the Myanmar-Bangladesh border at a river in a boat filled with other Rohingya fleeing the violence.

"I was worried for my young children, as children and women trying to cross the river were either drowned because their overcrowded boats capsized and they could not swim or being shot by guards on both sides," Begum relates.

The families stayed for two days at a temporary camp in Bangladesh before making their way to India and then Nepal.

"I sold my gold chain to fund our trip and buy food," Begum says.

"There were so many people in the camps in Bangladesh and they were without food and water."

Begum's family, along with Sofia's, is now living in the makeshift shelter in Kapan.

An earlier group of Rohingya came here in 2012 fleeing another wave of ethnic violence.

The Rohingya, who have been at Kapan for five years, have had a hard life.

Mohammad Yusuf, 44, who has been living with six family members in Kathmandu since 2014, said lack of government legal status made it hard to find regular work.

Only a few members of the community are working in the construction sector.

They are paid the equivalent of a few dollars a day.

At present, nearly 300 Rohingya, including children, are living in Kathmandu in two separate settlements.

The United Nations High Commissioner for Refugees (UNHCR) has provided refugee status to 140 of them and an additional 100 have applications being processed.

Begum and Sofia's families share one tiny shelter, which contains a bamboo bed with no mattress, a couple of blankets and a few cooking utensils.

Still, that is better than what they left behind.

"When we were in Myanmar, every day was full of terror and trauma."

But there is still the daily worry of trying to find enough food.

Rohingya families who have been in the camp for awhile, say they have no choice but to remain.

Yusuf said of the new arrivals; "A Muslim should help fellow Muslims in time of need." This included helping them learn the local language and find work.

He said there are concerns over the possible movement of more Rohingya into Nepal because of plans to deport Rohingya from India back to Myanmar.

The Nepalese Government has not publicly acknowledged any recent arrivals of Rohingya.

However, the government has alerted security agencies at border check points and instructed local government authorities not to allow anyone to enter Nepal without valid documents.

Nepal is not a signatory to a 1951 UNHCR convention relating to the status of refugees, and has no legal framework to deal with a large influx of refugees.

Two years ago, people from conflict-torn countries in Asia and Africa, including Rohingya, staged protests in Kathmandu.

Exceptions were made for Rohingya with special needs, such as disabilities and medical problems, as well as for single women and the elderly.

The UNHCR is also providing a modest educational allowance for children until grade 10.

Each Rohingya refugee registered by the UNHCR used to receive a monthly stipend of US$55, but that was reduced by 25 percent before being stopped altogether in January 2016.

At the time, the UNHCR attributed the cutbacks to a funding shortage and a surge in refugee movements around the world.

The UNHCR says it is closely monitoring the situation and collaborating with the Nepalese government to address any further challenges regarding refugee protection.