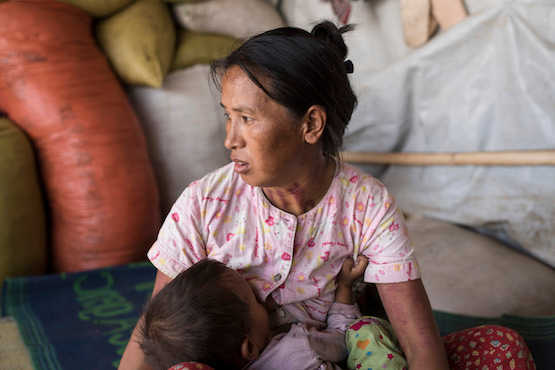 Zaung Nyoi feeds her daughter at the Mai Nar IDP camp in Kachin State, Myanmar. Currently the camp is home to more than 2,000 people. (Photo by Cory Wright)

"Despite the cold weather conditions, we immediately fled the camp at night because we were very concerned for our safety," said Ah Chan.

The barrage of eight mortar shells, fired by the Myanmar military which is engaged in a civil war with the KIA, didn't injure anyone in the Zai Awng IDP camp run by the Kachin Baptist Convention (KBC).

But it scared the 35-year-old woman, her family and hundreds of other ethnic Kachins into to seek safety in a nearby village in the Laiza district.

IDPs say the Myanmar military launches mortar attacks on IDP camps that are not in government held areas, to drive IDPs into government controlled areas. The military accuses Kachin civilians of supplying the rebel KIA with provisions.

Ah Chan's family and hundreds of others, originally fled from their homes in Waimaw township following a renewal in fighting between the two sides began in June 2011, breaking a 17-year ceasefire agreement.

Now, Ah Chan is among the 300 IDPs who have arrived at Mai Nar IDP camp since early January, joining the 2,100 people who have resided there for about five years.

Ah Chan, her family and the other new arrivals are now living in tents provided by the United Nations High Commissioner for Refugees. They are waiting for proper shelters to be constructed in the already crowded camp, also run by the KBC. Baptists constitute the major denomination, in this majority Christian state.

The renewed fighting between the KIA and the Myanmar military, has forced more than 100,000 people into IDP camps in Kachin and neighboring Shan State. This is nearly as high as numbers in the IDP camps in western Rakhine state, the scene of recent state-sponsored violence against the ethnic Muslim Rohingya people. Young children run about the dusty common areas of a smaller IDP camp at St. Paul's Ja Mai Kaung which is run by Catholic charity Karuna (Caritas). They generally seem blissfully unaware of their situation. The camp — on the outskirts of Myitkyina the capital of Kachin State — is currently home for 480 displaced people, most of whom are too afraid to return to their home villages.

"We simply don't trust the military or the KIA," said Roi Ja an IDP who is in-charge of St. Paul's camp. Roi Ja fled her village in 2012.

Assumpta Hkawng Ja, another long-time camp resident, said their houses were burnt down by the military —  so she fled her village of Nan Sanyan, which is just 20 miles away from Laiza.

"It is not possible to go back to our village as the military is based there and landmines are laid around the villages," said Hkawng Ja, a 56-year-old mother of two.

Women, children and the elderly

Both the St. Paul's camp and Mai Nar camp are typical of those in Kachin State where conditions are crowded and most of the population consist of women, children and the elderly.

There are 142 camps in the state that are generally away from conflict zones. The number of people in the camps ranges from 70 to over 2,000.

Food and malnutrition are fast emerging as the biggest concern in the camps. Instead of food rations, the World Food Program (WFP) has provided cash assistance to IDPs since early 2016. WFP provides 9,000 Kyats ($US 6.60) per person per month. IDPs say it is not enough.

"A family needs 2,000 Kyats per day for purchasing rice and other expenses," said Awng Lar, a resident in Mai Nat.

"At present, families purchase rice through debt from the seller and pay it back when they receive cash from the World Food Program and through any daily labor work they may do," he added. Children playing at St. Paul's Ja Mai Kaung IDP camp in Kachin State. Many of the camps in the surrounding area are swelling in numbers and forced to expand so to accommodate new arrivals. (Photo by Cory Wright)

"Under a new government, the humanitarian situation has worsened amid funding shortfalls and the military's systematic blockage of humanitarian aid," said Father Ja Yaw who was talking with ucanews.com in the St. Columban Cathedral compound in Myitkyina.

The priest explained that Karuna runs 40 camps across Kachin including those on the other side of effectively impassible mountains on the state's eastern border with China that are only accessible through Myanmar's Communist neighbor.

Father Ja Yaw said that for the camps on the border, and in very remote areas under control of the KIA, church workers undertake often-perilous journeys to deliver aid, often beholden to Chinese security forces.

United Nations Office for the Coordination of Humanitarian Affairs (UNOCHA) said that humanitarian access to conflict areas in Kachin State is "currently worse" than at any point in the past few years.

Since 2016, the U.N. and NGOs have had significantly less access to camps that shelter around 40,000 displaced people in Kachin and neighboring Shan State. This is due to an increasingly complex application process for travel authorizations for international staff to go to conflict areas according to the U.N.

"We are very concerned by the humanitarian impact of the escalation of fighting in past months in both Kachin and Shan States," says Pierre Peron, a spokesperson for UNOCHA in Myanmar. Facilities like kitchens and toilets were not part of the structures provided by the Myanmar government at Ngwe Pyaw San Pya resettlement village, which is about 22 kilometers from Myitkyina, the capital city of Kachin State. (Photo by Cory Wright)

Trust in 'The Lady' is fading

State Counsellor Aung Sun Suu Kyi's government has pledged to prioritize peace in the country. Her father, General Aung San oversaw the Panglong Agreement that covered issues related to self-autonomy and federalism with the Kachin, Shan and Chin ethnic groups in 1947. But the deal was never fulfilled, after the 1947 conference Aung San was assassinated and ethnic groups took up arms against the central government.

Despite Suu Kyi convening the 21st Century Panglong Conference in August 2016, peace remains elusive in Myanmar's north. While a second meeting is due on May 24, Suu Kyi has been criticized for not speaking out against heavy offensives by the military in Kachin State in recent months.

Most of the state's 1.7 million Kachins are Christians and among them 116,000 are Catholics. The state is also home to Buddhist ethic Shan and other minorities.

Phaw Yu Lu, a 65-year-old Kachin elderly woman who has resided in Mai Nar IDP camp since 2012 said most camp residents voted for Suu Kyi's National League for Democracy (NLD) party in the 2015 election. The NLD gained power amid expectations that Suu Kyi would be able to bring peace to the impoverished nation.

"But we have lost hope and we no longer trust her," said Phaw Yu Lu. "There is more fighting raging across our land. We have a long way to go, until we can return to our homes."

This is the first article of a two-part feature series on the lives of displaced people in Myanmar's Kachin State. To read the second article click here: Few options for Myanmar's resettled Kachins