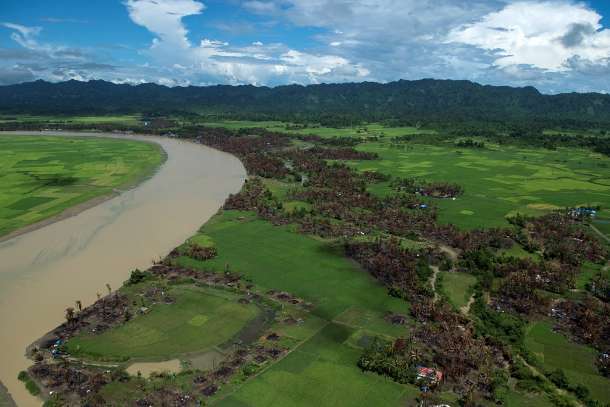 A burned village is seen from the air near Maungdaw in Rakhine state on Sept. 27, 2017. (Photo: AFP)

Eight members of the UN Security Council (UNSC) have called on Myanmar to intensify dialogue with Bangladesh to find a durable solution that enables the safe return of Rohingya refugees trapped in Bangladesh camps.

“We call on Myanmar to accelerate its efforts to address the long-term causes of the crisis in Rakhine and create conditions conducive to the safe, voluntary, sustainable and dignified return of refugees,” said a joint statement released by eight of the 15 members of the UNSC including France, the UK, Germany and the US.

“Accountability is an essential part of addressing the long-term challenges in Myanmar and in creating conditions for the return of refugees and internally displaced persons.

“We stress the importance of fighting impunity and holding accountable all those responsible for violations of international law and abuses, and call on Myanmar to cooperate with all international justice mechanisms, including the Independent Investigative Mechanism for Myanmar.”

The eight UNSC members said they stand ready to support Myanmar in these efforts and commended the work of the UN system, Asean and other regional partners in doing so too.

More than 700,000 Rohingya were forced to flee to Bangladesh following Myanmar’s military crackdown in August 2017.

To date, not a single Rohingya refugee from Bangladesh has returned to Myanmar under the official repatriation program between the two countries and the UN’s refugee agency.

The council also called for setting out “a transparent and credible plan to implement the recommendations of the Rakhine Advisory Commission and the Independent Commission of Inquiry.”

The closing of all internally displaced person (IDP) camps in Rakhine is a key recommendation by the commission. The government-established Independent Commission of Inquiry has ruled that there were war crimes and serious human rights violations against Rohingya in a 2017 crackdown in Rakhine but found “no genocidal intent.”

The UNSC move comes a few days after two deserters from Myanmar’s military reportedly confessed their role in killing Rohingya villagers in Rakhine under the instructions of commanding officers during the 2017 clearance operations.

Suu Kyi defended her country against genocide charges at the ICJ last December. She appealed to judges to dismiss allegations that Myanmar committed genocide and instead allow the country’s court martial system to deal with any human rights abuses.