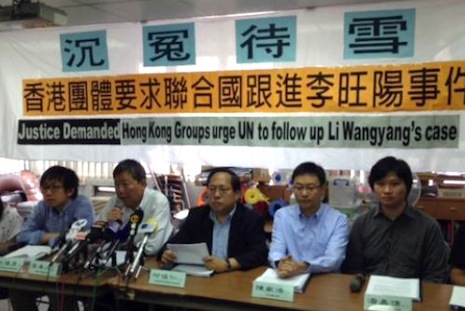 Civil society groups at the press conference in Hong Kong

A dozen civil society groups as well as former and current legislators in Hong Kong have appealed for a United Nations special rapporteur to investigate the suspicious “suicide” of mainland labor activist Li Wangyang. The groups made the call during a press conference here yesterday. Representatives of the coalition will file a formal request during the UN Human Rights Council meeting later this month in New York. The UN should put pressure on the Chinese government to ensure a proper and impartial investigation of the case and compensation for Li’s family, the group stated, adding that the government must also take all measures to prevent crimes of a similar nature in the future. Or Yan-yan, from the Catholic Justice and Peace Commission, said an independent review of Li’s autopsy revealed several questions. Li’s case was a “human rights violation but there are no more channels through which to redress it in mainland China,” she said. “So we have to take it to the UN and the international community.” Stephen Cordner, a professor of forensic medicine at Monash University in Australia who also reviewed the case, said investigations conducted by the Hunan provincial government failed to meet international standards and did not provide sufficient information to attest that Li committed suicide. Cordner further noted that the fracture of a neck bone, as was the case with Li, is rare in suicidal hangings. The coalition also accused the government of ignoring calls for intervention. Li was found dead and hanging from the window bars of his prison hospital room on June 6 just days after being interviewed by a Hong Kong television station. His sister Li Wangling and brother-in-law Zhao Baozhu were subsequently forcibly disappeared, while a long-time friend of the deceased, Zhu Chengzhi, was charged with subversion for spreading news of the suspicious circumstances of Li’s death. Zhao and his wife last week told local newspaper Ming Pao they never gave consent for an autopsy or approval for cremation of the body. They added they were also not included in any investigation by the government and did not endorse it. This contradicted claims by the government that Li’s family had agreed with the official report. The Ming Pao reporters were subsequently put under house arrest for nearly two days and forced to conduct their interview of Zhao and his wife again, under the supervision of government officials. In the second interview, Zhao was asked again about the investigation and replied: “Let’s not talk about the past.” Related reports Activist indicted for subversion Keeping China rights abuses in the news