It's high time China was brought to account for detaining up to 1 million Muslims, coalition of rights groups says 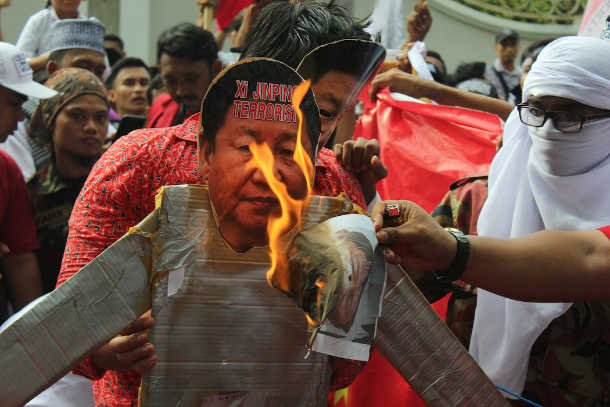 In this Dec.21 file photo, Indonesian Muslim protesters burn photos of Chinese President Xi Jinping together with the Chinese flags at a demonstration in Medan, against the detention of Uyghurs in China's Xinjiang region. Numerous detention centres have been set up in the region, holding as many as one million ethnic Uyghurs and other Muslim minorities, according to U.N. estimates. (Photo by Rahmad Suryadi/AFP)

Sixteen human rights and civil society organizations have called on the United Nations Human Rights Council (HRC) to adopt a resolution establishing an international fact-finding mission to probe allegations that China has arbitrarily detained up to one million Turkic Muslims.

The Muslims have reportedly been thrown into extrajudicial “political education” camps across the Xinjiang region in the northwest of the country, they said in a joint statement.

During its next session, which starts on Feb. 25, the U.N. rights council is due to examine the outcome report of China’s November 2018 Universal Periodic Review at which Chinese officials denied committing rights violations in Xinjiang.

“The magnitude of abuses allegedly occurring in Xinjiang demand uncompromising scrutiny from the Human Rights Council,” said Kenneth Roth, Executive Director at Human Rights Watch, one of the statement’s signatories.

Other signatories included Amnesty International, the World Uyghur Congress and the International Federation for Human Rights.

“The Human Rights Council’s integrity demands that states not allow China to hide behind its membership or economic might to escape accountability,” Roth said.

The statement accused Chinese authorities of detaining Uyghurs and other Turkic Muslims without any due process in “political education” camps for their perceived disloyalty to Beijing and the Chinese Communist Party.

In the camps, they subjected to forced political indoctrination, renunciation of their faith, mistreatment, and, in some cases, torture, the statement said.

China has not responded positively to numerous requests, including from the U.N High Commissioner for Human Rights for unfettered access to the region.

Last month and in December the government allowed visits by some journalists and diplomats to what they claimed were “vocational training centers.”

State media spin later said the visitors were impressed with conditions and found the detainees in “good spirits.”

“China has had multiple opportunities over the past year to answer serious questions about the horrendous situation in Xinjiang, and at every turn provided narratives that strain credibility,” Amnesty International secretary-general, Kumi Naidoo said.

“China should recognize that only an international fact-finding mission can separate facts from fiction and set the record straight.”

The proposed resolution would urge the High Commissioner for Human Rights to send a fact-finding mission to assess the situation and report to the Human Rights Council at its next session, according to the statement.

It should also welcome China’s expression of willingness to allow access by international experts, and stresses that such access must be independent, unrestricted, and unsupervised, the statement said.

China should also be reminded of its obligations as a member of the Human Rights Council to “uphold the highest standards of human rights” and to “fully cooperate with the HRC,” the rights and civil society organizations said.

“For too long Uyghurs and other Muslims have suffered gross repression at the hands of Chinese authorities,” said Dolkun Isa, President of the World Uyghur Congress.

“We are now looking to the HRC to act — and get to the truth.”