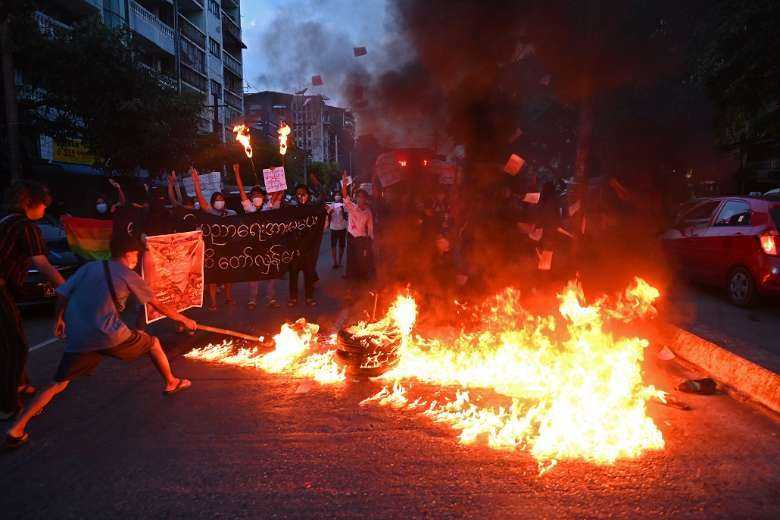 Protesters burn a picture of Myanmar's military chief Min Aung Hlaing during a demonstration against the military coup in Yangon on Nov. 10. (Photo: AFP)

Rights groups and civil society organizations have expressed disappointment with the inadequate response by the United Nations Security Council to Myanmar’s escalating conflict.

The Security Council has expressed deep concern over the situation in Myanmar and called for an immediate cessation of violence and for efforts to ensure that civilians are not harmed.

But the Nov. 10 statement appeared to be merely a way of achieving consensus among the 15 Security Council members, it is claimed..

It also failed to mention the escalation of military activity in northwestern Myanmar where the build-up of heavy weapons and troops by the junta appeared to be intended for clearance operations.

“If the UN Security Council was fulfilling its mandate, it would already have imposed an arms embargo, referred the situation to the International Criminal Court, imposed targeted economic sanctions and sanctioned the supply of aviation fuel,” said Anna Roberts, executive director of Burma Campaign UK.

“What was needed was a clear warning to the military that a new offensive in northwestern Myanmar would not be tolerated. What we got was a statement that didn’t even directly refer to the situation.”

How many more lives must be taken and how many more townships destroyed before the situation warrants more than a statement by the world body?

The group has called on the United Kingdom, United States and the European Union to urgently implement further economic sanctions and take other steps following the failure of the Security Council to agree to effective action.

“Words and statements of concern from the highest authority of the world body disregard the real threats against human security that is experienced by the people of Myanmar at the hands of the junta who continue to slaughter innocent people with total impunity,” said Khin Ohmar from Progressive Voice, an advocacy organization for human rights and social reform.

“The escalating violence in Myanmar is an embarrassment and a testament to the repeated failures of the UN system that challenges the relevancy of the UN Security Council to maintain international peace and security.”

Salai Za Uk from Chin Human Rights Organisation said that while the Security Council was meeting to discuss the situation in Myanmar, the military burned down more houses in Thantlang town. They have burned, destroyed and vandalized at least 22 churches and religious buildings in Chin state since August.

“How many more lives must be taken and how many more townships destroyed before the situation warrants more than a statement by the world body?” he asked.

Last week 521 Myanmar, regional and international civil society organizations called for the Security Council to adopt a resolution to consolidate international action to stop the military’s violence against the people of Myanmar.

The junta recently deployed troops and increased its attacks against civilians in Chin state, Sagaing and Magwe in the northwest while continuing its attacks in Kayah, Karen and Shan states.

Since the military coup, the Southeast Asian nation has been plagued by unrest, with peaceful demonstrations against military rule met by a fierce crackdown.

That has triggered a low-level insurgency in urban areas and guerrilla attacks in rural and ethnic areas where minority groups have been engaging in intensifying clashes with the military.

The UN humanitarian chief warned that more than 3 million people are in need of live-saving assistance in the conflict-torn country and “without an end to violence and a peaceful resolution of Myanmar’s crisis, this number will only rise.”