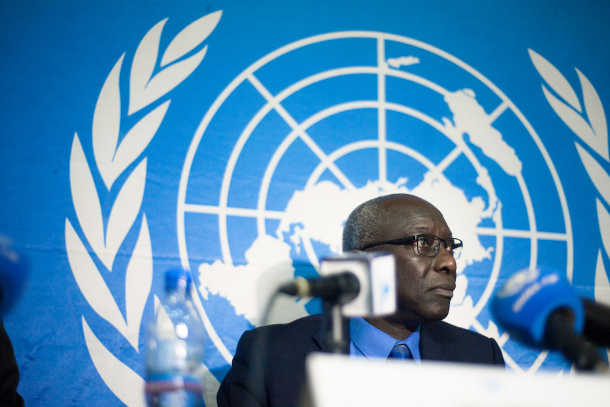 A file image of Senegalese Adama Dieng, the U.N. secretary-general's special adviser on the prevention of genocide, at a press conference on Oct. 11, 2017. (Photo by Florent Vergnes/AFP)

The United Nations will shine a light on genocidal acts committed by Pakistani forces during Bangladesh’s 1971 war of independence, a top U.N. official has said.

Adama Dieng, the U.N. secretary-general's special adviser on the prevention of genocide, made the pledge to Bangladeshi Prime Minister Sheikh Hasina on March 24.

“Though some countries may oppose, we will raise the issue of Pakistani genocide in Bangladesh during the liberation war in the international forum,” said Dieng in comments reported by state-run news agency BSS.

Dieng visited Bangladesh ahead of the country’s Independence Day on March 26.

Hasina described to Dieng the scale of the atrocities committed in 1971.

“Over three million people were killed, and 200,000 mothers and sisters were violated by the Pakistani occupation forces and their local collaborators,” Hasina said.

Activists say recognition for the 1971 genocide is long overdue.

“The 1971 genocide remains unknown and unrecognized to the world due to Bangladesh’s failure to raise it properly in international forums,” said Shahriar Kabir, president of the Committee for Secular Bangladesh and Trial of War Criminals of 1971.

Kabir has been a part of the effort to have March 25 declared as National Genocide Remembrance Day in 2016. “We have enough information and evidence to support the claim for genocide,” he said.

Recognition of what occurred is required to heal wounds that still hurt today, said Holy Cross Father Liton H. Gomes, secretary of the Catholic Bishops’ Justice and Peace Commission. “The recognition of the genocide is important, and it is long overdue,” Father Gomes said.

The priest said if the 1971 genocide had been dealt with justly, the Myanmar military would have had second thoughts before doing what they have been doing recently to Rohingya Muslims in neighboring Myanmar.

A long road to independence

During the 1947 British partition of India and Pakistan, Bengali Muslims of East Bengal joined Pakistan and it was renamed East Pakistan in 1956.

Despite making up the majority in Pakistan, Bengali people faced widespread socioeconomic, cultural and political discrimination from the West Pakistani political and military establishment for years, triggering a call for regional autonomy and self-rule among Bengali people.

During the first general election of Pakistan, the Awami League led by Sheikh Mujibur Rahman, father of Hasina, secured an absolute majority.

West Pakistani ruling elites and the military refused to transfer power to the Awami League, which sparked violent street protests across East Pakistan.

Sheikh Mujibur Rahman declared independence for Bangladesh in the early hours of March 26 before he was arrested for sedition.

During the nine-month war, the Pakistani military and their local Islamist collaborators killed about three million people and raped over 200,000 women, while some 10 million fled to India as refugees.

With support from India, Bengali nationalists waged a war against the military. On Dec. 16, Pakistan's military surrendered to joint forces of Bengali guerrilla fighters and the Indian army, which made way for an independent Bangladesh.

Pakistan continues to deny any genocide took place and has not apologized for the atrocities.

In 2010, Bangladesh established an International Crimes Court to prosecute Islamist politicians for their crimes against humanity during the war. Dozens of politicians were convicted and given life sentences or hanged.