UN slams its own role in Myanmar 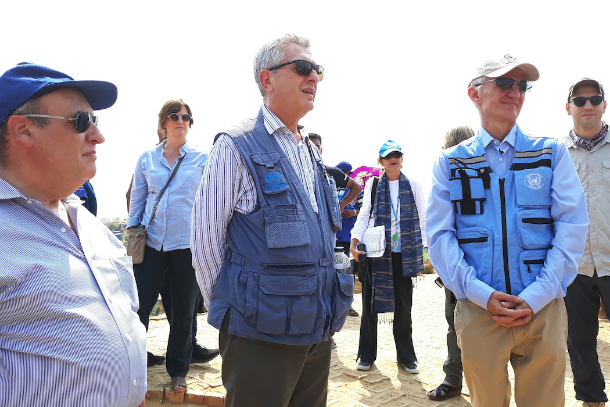 United Nations High Commissioner for Refugees Filippo Grandi (center) stands next to other members of a delegation of U.N. organizations during a visit to a Rohingya camp in Ukhia, near Cox's Bazar, in Bangladesh on April 26. (AFP photo)

A damning internal report by the United Nations states that the world body botched the way it dealt with Myanmar ahead of the military's crackdown on the Rohingya population of Rakhine State in August 2017.

Former Guatemalan foreign affairs minister Gert Rosenthal examined how the U.N. in Myanmar did not adopt a unified strategy before hundreds of thousands of Rohingya fled into neighboring Bangladesh.

"Without question, serious errors were committed and opportunities were lost in the U.N. system following a fragmented strategy rather than a common plan of action," Rosenthal wrote in a 34-page report published on June 17.

Rosenthal was appointed by secretary-general António Guterres earlier this year to look into U.N. involvement in Myanmar from 2010 to 2018.

He wrote that the U.N system overall had been "relatively impotent" in working with Myanmar authorities to stem negative trends in the observance of human rights.

Rosenthal concluded that the U.N's systemic failures could not be attributed to any single entity or any individuals. Rather, there was a shared responsibility for not being able to engage constructively in the political process while also more forcefully conveying the U.N's principled concerns regarding grave human rights violations.

Rosenthal noted that the U.N. Security Council should bear some responsibility for not providing enough support to the Secretariat when such backing was, and continues to be, essential.

A U.N. spokesperson said Guterres is committed to implementing the report's recommendations in order to "improve the performance of the United Nations system."

Phil Robertson, deputy director of the Asia division at Human Rights Watch, said the much anticipated U.N. report is an exercise in assigning blame without pointing fingers specifically at anyone.

He said it could only be described as "a damp squib and an utter disappointment" given the scale of crimes against Rohingya in Rakhine. Robertson said people should have been fired from their positions because of the many failures, starting with Renata Lok-Dessallien, the U.N. resident coordinator who he said presided over a mess and continually downplayed the severity of the crisis until it was too late.

"The report now looks increasingly like a check-the-box exercise by U.N. secretary-general António Guterres designed to show commitment to accountability when in reality it accomplishes exactly the opposite," Robertson said in a June 18 statement.

He added that the people of Myanmar deserve a better explanation from the U.N.

Richard Horsey, a political analyst based in the commercial hub of Yangon, said there was no real surprises in the Rosenthal review as the systemic problems were already well known.

"The question is what will now change," Horsey, a former senior United Nations official in Myanmar, said on Twitter. "Most likely very little, unfortunately."