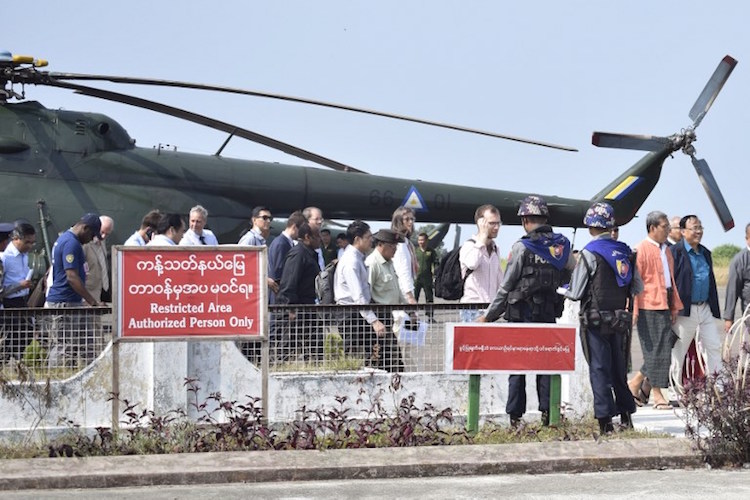 UN Security Council delegates arrive at Sittwe airport on May 1. They were in Sittwe for a meeting with Myanmar officials and to inspect the latest situation in Rakhine State, home of the minority Rohingya Muslims. (Photo by AFP)

A delegation from the United Nations Security Council (UNSC) traveled to northern Rakhine on May 1 as part of a four-day visit to the region investigating the Rohingya crisis.

A day after arriving in Myanmar, the UNSC team conducted a day trip to Maungdaw in the state's north where they visited Rohingya villages and refugee reception centers.

Rohingya who did not flee to Bangladesh and who remained in the region told ucanews.com that they welcomed the envoys' visit.

Numar, a Rohingya from Pan Taw Pyin village near Maungdaw town, said the visit would bring hope to the nearly 700,000 Rohingya who fled to Bangladesh to escape a Myanmar military crackdown that the U.N. dubbed as ethnic cleansing.

Hla Tun, a Rohingya from another village near Maungdaw, said he hoped the visiting diplomats would help restore the Rohingya's rights and citizenship. A 1982 citizenship law resulted in most of Myanmar's Rohingya population being rendered stateless and without voting rights.

Hla Tun fled to Maungdaw town as his village was burned down by Myanmar security forces. He said people wanted to return to their homes but their current citizenship status was a major barrier.

Hla Tun also said that the government must rebuild what the military has destroyed.

The government has built more than 200 houses for Rohingya who lost their homes in three villages, according to local media reports. As part of that, 22 houses have been constructed in Numar's village of Pan Taw Pyin where hundreds of Rohingya houses were burned down.

But Sultan, a Rohingya from Maungdaw township, said he doubted whether the U.N. team would be able to observe much in a single day.

"This is a government-organized day trip. Some of the burnt villages have already been bulldozed so the U.N. team will not know how it occurred," Sultan, a former schoolteacher, told ucanews.com.

The UNSC delegation arrived in Myanmar on April 30 and had a meeting with State Counselor Aung San Suu Kyi and military chief Min Aung Hlaing separately in Naypyidaw.

Suu Kyi said they are ready to accept Rohingya refugees approved for repatriation but added that Myanmar officials need to verify that they lived in Rakhine State before the crackdown.

Before coming to Myanmar, the UNSC delegation met with Bangladeshi officials and visited refugees in two camps in southeast Bangladesh on April 28-29.